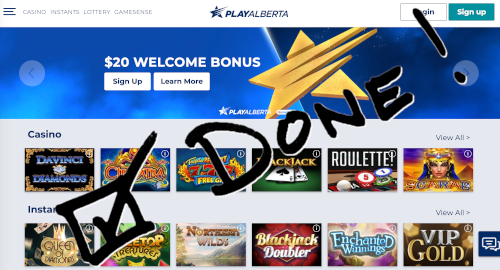 Online gambling, at least the locally licensed kind, has finally come to the Canadian province of Alberta.

On Thursday, the Alberta Gaming, Liquor & Cannabis Commission (AGLC) announced the launch of PlayAlberta.ca, an online casino and lottery site powered by NeoPollard Interactive. The product is accessible via desktop, tablet and smartphones to Albertans over 18 years of age, provided they’re physically located in the province.

For the time being, there’s no poker product and no sports betting – even the limited parlay betting currently permitted under Canada’s arcane wagering laws – but the site is promising to add “more features” in the coming months. AGLC insists PlayAlberta will generate modest revenue of C$3.74m in fiscal 2021 (which ends March 31) but expects to raise C$150m (US$113m) within the next five years.

AGLC president Alain Maisonneuve said the site hopefully wouldn’t cannibalize the province’s land-based gambling options, which are seriously struggling right now. The province estimates its share of gaming revenue will be down C$900m this year after casinos were ordered shut from March to June due to the COVID-19 pandemic.

Alberta’s path to legal online gambling has been long and torturous, and the AGLC suggested only this March that its site likely wouldn’t launch until “mid-2021.”  The fact that the site is so bare-bones is likely a combination of impatience with the process and a need to compensate for lost land-based revenue.

Alberta has only around 4.4m residents, putting it in the middle of Canada’s provinces in terms of population. The largest province, Ontario, has over 14m residents and yet its PlayOLG site managed revenue of only C$92m in its most recent fiscal year (the 2019-20 numbers are currently way overdue).

The fight among provincial gambling monopolies for Canada’s online crown is currently being won by British Columbia, where the PlayNow site recently reported revenue of C$179m from around 5.1m residents. Runner-up Quebec has around 8.6m souls but its Espace-jeux site could manage only C$136m.

Canada’s four Atlantic provinces have a combined population of only around 2.5m and their online offering – which is limited to lottery products, bingo and parlay sports betting – generated a profit of $10.3m in its most recent fiscal year (without disclosing revenue totals).

That just leaves Saskatchewan and the two northern territories on the list of online gambling holdouts. Saskatchewan briefly had a tribal-run online casino but it closed in under two years due to its inability to promote itself in a “very competitive” environment.

Saskatchewan is also the birthplace of none other than Calvin Ayre, who actually offered his expertise to the province a decade ago when it expressed tentative online gambling ambitions. Should have taken that offer when you had the chance, guys.