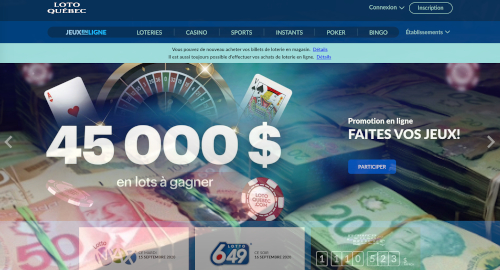 Quebec’s online gambling monopoly reported revenue rising 29% in its most recent fiscal year, but the site still can’t catch up to its west coast rival.

The decline was expected, given the chilling effect that COVID-19 inflicted on the province even before the shutdown of all non-essential retail operations in March. Loto-Quebec CEO Lynne Rotier noted that the impact on the current fiscal year will be significantly greater, but the company was doing its best to reduce expenses to offset the damage.

Loto-Quebec’s mainstay lottery division (which includes online lottery sales) saw revenue slip 2.8% to C$929.4m, partly due to the pandemic but also from the awarding of a C$70m jackpot – the biggest in Loto-Quebec’s 50-year history – in February and a C$65m prize last June.

Video lottery terminal revenue from bars and bingo halls took a much bigger hit, falling nearly 11% to C$872.6m. The decline was partly due to the retail shutdown but also some internal shuffling, which saw the transfer of gaming hall operations to the Société des casinos du Québec (SCQ).

That transfer allowed the newly expanded casino and gaming hall division (which includes online casino activity) to buck the downward trend by rising 5% year-on-year to C$963.7m.

Loto-Quebec’s retail lottery sales resumed on May 4 while its four casinos began reopening in mid-July. In late-June, the monopoly laid off 2,250 of its roughly 6,000 staff, a move Loto-Quebec said was temporary. But with the province struggling to control a second wave of COVID-19 infections and the casinos still operating at reduced capacity, it’s unclear when or if most of the furloughed staff will be recalled.

Loto-Quebec doesn’t break out individual stats for its Mise-o-jeu parlay sports betting product, which added in-play (parlay) wagering this July.  It’s safe to say that the ongoing requirement to bet on a minimum of two events hasn’t convinced many bettors to give up their internationally licensed online gambling options and the recent demise of Canada’s latest effort to allow single-game sports betting won’t help that cause.