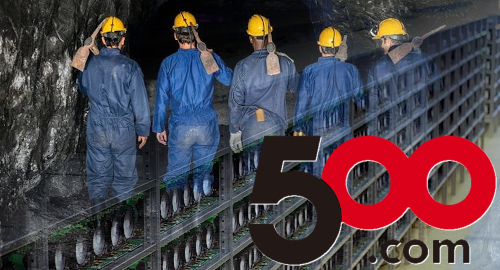 Asian online gambling operator 500.com is once again attempting to diversify its revenue streams, this time by getting into Bitcoin mining.

On Monday, the Nasdaq-listed 500.com announced that it had entered into a definite purchase agreement with “certain non-US persons” to acquire ‘Bitcoin mining machines’ in exchange for nearly 11.9m newly issued 500.com Class A shares worth some US$14.4m.

500.com expects the deal to be completed sometime in the current quarter, with another four weeks required to install all the acquired mining devices (which will have a total hash power capacity of 918.5 PH/s – 1 PH/s is one quadrillion hashes per second). The sweet Bitcoin mining revenue is expected to start flowing in the first half of 2021.

Monday’s news follows an earlier private placement 500.com announced a few days before Christmas. That announcement detailed a share subscription deal with Hong Kong-based Good Luck Information Technology Co, which agreed to purchase nearly 86m new 500.com shares “to be settled in US dollars or in crypto-currencies, including Bitcoin.”

That announcement included a proposal by 500.com’s board to “explore business opportunities in the blockchain and cryptocurrency industries based on some success experience of its associate, Loto Interactive Ltd.” Loto Interactive, formerly known as MelcoLot, distributes retail lottery terminals for China’s welfare and sports lottery operations.

500.com responded by acquiring a payment processing outfit that it sold just six months later (for a profit). 500.com then bought the Malta-based parent of Multilotto.com, which quickly became responsible for 99% of 500.com’s revenue.

But that stream went dry one year ago when 500.com neglected to renew Multilotto’s gaming license in Sweden, which had been responsible for over 60% of the site’s customers. Multilotto was finally cleared to resume Swedish operations last September.

That weakness reportedly contributed to 500.com’s Japanese corruption scandal, which sprung from the company’s ill-fated efforts to branch out into land-based casino gambling. The net result was criminal convictions for 500.com consultants who bribed Japanese legislators in an effort to boost 500.com’s longshot chances of winning a Japanese integrated resort license.

In other 500.com news, the company announced that chief technology officer Zhaofu Tian had resigned a couple days after Christmas for “personal reasons.” Interestingly, the company said it has “no plan to appoint a successor at this point.” Which totally makes sense, because when you’re diversifying into a new business utterly dependent on technology, the last thing you need is some egghead telling you what to do.