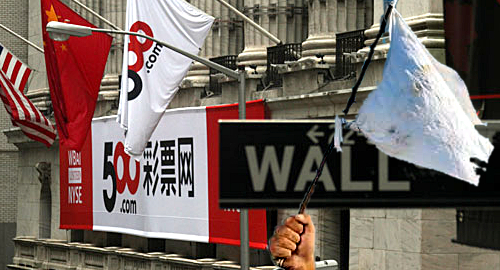 Struggling online lottery and casino operator 500.com lost over $91m in 2019 and has only around half that sum left in its coffers with virtually no revenue coming in.

On Thursday, the Shenzhen-based, Nasdaq-listed 500.com announced that its revenue in the final three months of 2019 totaled a mere RMB8.6m (US$1.2m), less than one-third of the RMB27.2m the company generated in Q4 2018. The company’s operating losses tripled to RMB298.7m while the company booked a net loss of RMB307.9m.

Nearly 99% of 500.com’s Q4 revenue came via its European-facing The Multi Group (TMG), which offers online lottery betting and casino products via the Multilotto brand. The brand has suffered ever since the beginning of 2019, when the launch of Sweden’s regulated market forced Multilotto’s customers to re-register their accounts, except many chose not to bother.

Worse, 500.com neglected to renew TMG’s Swedish license on time, leading to the suspension of TMG’s Swedish operations in early January. Since over three-fifths of TMG’s customers were Swedish, this represents an existential threat to the business.

Last week, 500.com announced that it was still awaiting the renewal of its Swedish license, despite having submitted all the application materials and kept in close communication with the Spelinspektionen regulatory body. The company warned investors that its Q1 2020 operations have been “materially and adversely impacted.” No kidding.

500.com’s claim to fame used to be its designation as one of only two companies China authorized to take part in an online lottery sales pilot program. That program came to an abrupt end in early 2015, when China ‘temporarily’ suspended all online sales after discovering that provincial lottery administrators weren’t reporting all online income.

500.com is currently embroiled in a major scandal involving alleged bribes to Japanese lawmakers who had influence over the country’s plans to issue three casino licenses. The scandal led 500.com’s chairman to resign in early January and the company’s CEO followed suit earlier this month.

Believe it or not, 500.com may have more pressing issues at hand. With no revenue coming in via TMG, and no other revenue streams in the works, 500.com’s ability to carry on for too much longer appears very much in doubt. As of December 31, 2019, the company had less than $52m in cash and equivalents, another $600k in restricted cash and time deposits of $3.4m.

Despite this dire outlook, 500.com’s shares closed out Thursday’s trading up nearly 13% to $5.67. Did they find a coronavirus vaccine that we don’t know about?