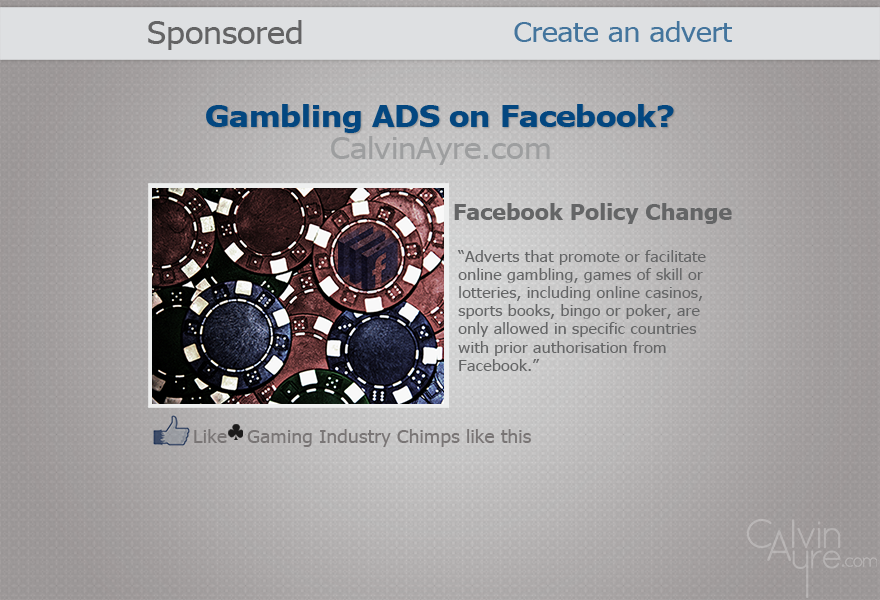 The chances are that if you’re an operator then the update should have grabbed your attention already. But for those who need a reminder or anyone who managed to remain blissfully unaware, here it is:

“Adverts that promote or facilitate online gambling, games of skill or lotteries, including online casinos, sports books, bingo or poker, are only allowed in specific countries with prior authorisation from Facebook.”

This is the Facebook policy change that now allows iGaming companies to use the social networking site more freely. But it won’t all be plain sailing as it also came to light that online gambling industry companies will require prior authorisation from Facebook before putting their campaigns live. However, this is a small price to pay for access to the 800 million strong Facebook community and a significant loosening on the restrictions that had governed iGaming companies.

Before the changes, those that were determined to have a Facebook page were able to do so, but they were restricted to four posts a week. Not only this but all of these posts had to be approved by Facebook.

If anyone happened to be questioning why this was a big deal, simply take a look at the numbers. Online gambling companies are now able to target the 800 million Facebook users that log on across the world. In doing so they will be contributing to the $5.5 billion figure which is expected to make up the total social media advertising revenue this year – a total which is expected to rise to $8.2 billion in 2012.

The targeting opportunities available are another reason that Facebook’s policy changes could be very good news for iGaming companies. Knowledge of user location, education, age, gender, friends and interests means that you’re able to specify the exact type of person that you wish to target and then reach them.

The more observant among you may have noticed the impressive relevance of ads that are served. Some even leave you wondering how on earth they knew you were interested in the topic concerned.

There’s also no doubt that there’s a target market on Facebook for iGaming companies. For one, Zynga Poker has 33 million active users and has used this success to build non-gambling social games. But it’s not just poker that has the ability to succeed on Facebook, Double Down Casino has an impressive 3 million active users while many other applications are starting out.

Simon Spaull is the Chief Development Officer at TBG Digital, an online advertising agency that focuses specifically on Facebook. He reveals that evidence has already shown that gambling companies can do well on Facebook.

He says: “Bingo works well – it has an inherent social aspect to it already, so converts easily to Facebook. However, we may begin to see other gambling sectors coming through to the fore as regulations relax.”

So, it’s safe to say that Facebook advertising is an opportunity that iGaming companies should relish. But as very little iGaming advertising has previously been permitted on the social network, few gambling professionals will know where to start.

Spaull confirms that even though Facebook advertising has been running for some time, it’s still very unpredictable.

He adds: “We wait with interest to see how Facebook’s recent relaxing of regulations concerning gambling companies affects the range of options available, but currently, gaming apps offer good opportunities for advertisers.”

Regardless of whether you’re running a Facebook campaign directly or not, you should be aware of the four options open to Facebook advertisers. The first of these is the only previous form of Facebook advertising that iGaming companies were able to indulge in – pages.

Next up are ads, a technique that most iGaming professionals should be familiar with already. These operate in very similar ways to other online ads with the added benefit of being able to target very specifically (as explained above). As a result of this targeting, advertisers can expect high click through rates and therefore greater effectiveness of campaigns.

Spaull adds that TBG Digital have found this format to be particularly effective, he says: “Marketplace is currently the most effective option as it enables advertisers to deliver the right message to the right people at the right time, and through a higher volume of impressions.”

Sponsored stories are similar to ads but impressions are generated on a different basis. They use the holy grail of marketing, word of mouth, and are extremely effective in doing so. Basically, when your page or application is used or liked by a Facebook user, this information will appear as a post on that user’s friends’ news feeds. Also possible is for users to check in at one of your locations – although this is less likely to be relevant to online companies unless a user turns up at your offices.

As with ads, you’re able to streamline this aspect of your Facebook advertising by ensuring that your stories only appear to people whose information corresponds with your target market. Thus creating what every online advertiser wants in the high click through rates mentioned above.

Potentially, the most exciting prospect of the Facebook advertising is platforms. A number of different features fall under this category but it mainly consists of creating social plugins on your own site and the most exciting of all – creating your own application.

Facebook recommends that the key to a successful application is all about engagement. This is something that should come fairly easily to iGaming companies as gambling-style apps are already proving to be some of the most engaging around. Six of the 20 most engaging Facebook applications according to AllFacebook.com are gambling based.

This leaves iGaming companies with two options, build your own app, or buy or sponsor one that’s already made. Sponsoring or buying a gambling-style app would appear the preferable option. This provides you with a potentially new group of people that you can be sure are interested in gambling and with a brand behind it, virality and word of mouth may begin to do your work for you.

Before the recent policy changes, the challenge was monetising these apps. However, the newfound ability that players have to click through from apps directly to iGaming sits means that this issue should now have been conquered. As a result it appears as if all pieces are now in place for iGaming companies to finally take advantage of a market that has evaded them for so long.