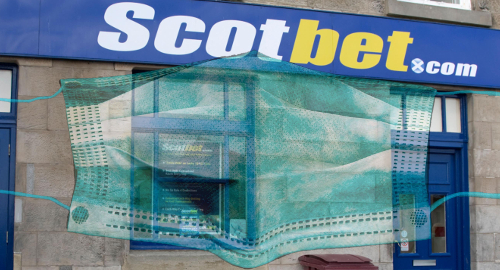 Scotland’s bookmakers could be forced to purge their payrolls if local authorities don’t lift tough new COVID-19 restrictions, according to the UK’s betting lobby.

The roughly 7k British betting shops that were ordered to close in mid-March were allowed to reopen on June 15 provided they installed certain health & safety measures. Scotland’s roughly 900 shops followed suit on June 29, but with additional restrictions such as no chairs, no live racing broadcasts on shop TVs, and a requirement to switch off all shop gaming machines.

Scottish Finance Secretary Kate Forbes said the added restrictions were intended to “avoid clusters of people” staring slack-jawed at televisions or mindlessly feeding bank notes into machines while circulating their droplets in an enclosed space. The shops were allowed to open “for the purpose of placing bets only.”

Ironically, the machines that Scottish officials insist remain offline include self-service betting terminals, which, if allowed to remain functional, would eliminate the need for any interaction between customer and staff and thereby significantly reduce the time spent inside a shop.

The BGC claimed that, since reopening, Scottish bookies have seen their betting turnover fall 95% compared to their pre-lockdown rates, although some of that may reflect the fact that sport and racing have yet to fully ramp up following their own COVID-19 shutdowns.

BGC CEO Michael Dugher said bookies’ worst-case forecasts were proving accurate and urged Sturgeon “to intervene before it’s too late” to save the jobs of the estimated 4,500 staff employed at Scottish shops. Dugher noted that bookies south of the Scottish border “have been able to re-open perfectly safely with social distancing and anti-Covid measures like screens and hand sanitizers, and the exact same measures are in place in Scotland.”

Meanwhile, in another forgotten corner of the UK, the roughly 300 betting shops in Northern Ireland were finally allowed to reopen last Friday (July 3), while arcades and bingo halls will have to wait until July 29.