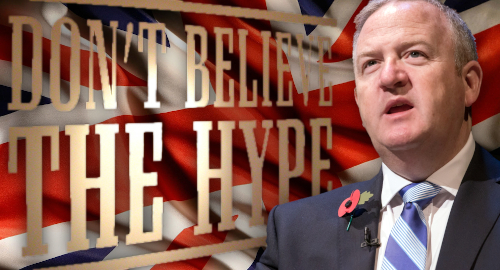 UK online gambling operators’ claims of a thriving unauthorized black market are being refuted by their own regulator ahead of the government’s review of gambling laws.

Shortly before Christmas, the UK’s Betting & Gaming Council (BGC) lobby group circulated details of a PricewaterhouseCoopers (PwC) report that claimed some 200k UK punters spent around £1.4b on unauthorized internationally licensed online gambling sites in a 12-month period spanning 2018 and 2019.

The PwC report further stated that internationally licensed sites not authorized to conduct business in the UK accounted enjoyed 27m visits from UK punters during the period in question, equal to 2.5% of all online betting visits. These sites also claimed a 9% share of all UK gambling search results.

BGC CEO Michel Dugher claimed these statistics should help guide the government’s review of the Gambling Act 2005, which promises to severely clip the wings of UK-licensed sites. Dugher said the PwC report demonstrated “the danger of unintentionally driving punters into the arms of the illegal, online black market – which offers none of the protections of the regulated sector.”

But in a letter to the All-Party Parliamentary Group (APPG) on Gambling Related Harm, UK Gambling Commission (UKGC) CEO Neil McArthur pushed back on the PwC’s claims, saying the report was “not consistent with the intelligence picture.”

McArthur (pictured) said the UKGC’s own evidence suggested that the industry’s warning of a thriving online black market was being “exaggerated” by “consultants paid for by the industry.” The regulator was “not convinced” by the BGC’s argument that “raising standards in the licensed market will prompt consumers to gamble with illegal operators.”

Undaunted, the BGC issued an animated video on Monday pimping the idea of UK-licensed operators being the “safer bet” for consumers, while celebrating the sector’s contributions to the overall economy as well as direct payments to racing and sports bodies. The video also repeated warnings of the “unintended consequence” of excessively tightening the regulatory screws.

MP Carolyn Harris, who chairs the gambling APPG, accused the BGC of “an incredibly transparent tactic” of “trying to hijack the debate by manufacturing dodgy dossiers of information.” Harris, a staunch opponent of gambling, noted that the BGC had “refused a request to provide a copy” of the PwC report to the APPG.

The Guardian obtained copies of both the final version of the report and an earlier draft and noted the final version had removed the names of the three gambling operators that commissioned it – GVC Holdings (since rebranded as Entain), The Stars Group (now part of Flutter Entertainment) and William Hill.

It’s worth noting that brands controlled by Entain and Stars operate in numerous markets in which they have no authorization whatsoever from local authorities. While vague pledges have been made about increasing regulatory compliance, frankly, it’s a bit rich for these operators to accuse companies who’ve opted against receiving a UK license of being irresponsible rogues preying on helpless consumers while excusing their own grey-/black-market activities outside the UK.