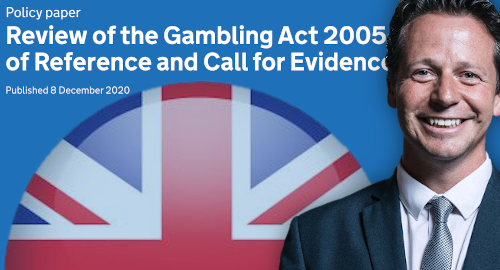 UK gambling operators are furiously poring over the government’s roadmap for reviewing its gambling rules, looking for landmines and finding some surprises along the way.

The UK government has published the terms of reference for its long-awaited review of the Gambling Act 2005, which was formally announced Tuesday. The government has issued a call for evidence on a variety of gambling-related issues, with a deadline for responses of March 31, 2021.

The government plans to assess the evidence gathered via this 16-week process “alongside other data,” after which it will issue a white paper sometime next year containing its proposals for reform.

The terms of reference state the government’s aim of ensuring that “all those who choose to gamble in Great Britain to be able to do so in a safe way.” This will be accomplished by examining whether gambling rules have kept pace with the “technological advances” that have developed since 2005.

The government notes that rates of gambling participation and problem gambling have not experienced a “marked increase” as gambling activity increasingly shifts from land-based to online play. But “a stable problem gambling rate does not necessarily indicate a stable quantum of harm,” and this shift has both “presented new risks” and “new opportunities to enhance player protections.”

HEY, BIG SPENDER…
The UK Gambling Commission (UKGC) recently begun studying the issue of affordability checks to determine at what point gamblers may be spending beyond their means. The government’s review seeks to know whether online spending limits “should be on a universal basis or targeted at individuals based on affordability or other considerations.”

The government is interested in whether online operators can share data to determine how much a gambler may be spending across the sector, not just with one site. The review also seeks to learn how much of operators’ online revenue is derived from both the top- and bottom-10% of spenders and to what degree this spending varies by product.

The government is equally curious whether there’s any evidence to suggest that “new and emerging technologies, delivery and payment methods such as blockchain and crypto currencies could pose a particular risk to gambling consumers.”

OFF-WHITE LABELS
The government flagged so-called ‘white label’ agreements, in which UKGC licensees act as a channel through which other non-UK operators can offer services to UK residents. There are currently over 700 white label ‘partners’ making use of this system, although that figure represents a significant decline from just a few years ago.

The government notes that the UKGC has made it clear that licensees will be held liable for their white label partners’ activities, but these partners may have chosen this path because they are “unable to meet the GB regulatory standards required to obtain a licence themselves, and that this therefore poses risks to consumers.”

MARKETING
Online gambling advertising has been a particular sore spot for the government, and new restrictions are in the works despite industry efforts (and some successes) to reduce their exposure. Among the government’s areas of concern is “what, if any” evidence supports the effectiveness of operators’ responsible gambling messaging.

The issue of sports sponsorship was raised with the caveat that clubs had the right to “benefit from commercial deals.” Nonetheless, the government seeks to strike “an appropriate balance” between these rights and “growing public concern” over gambling exposure.

The review also seeks input on the harms or benefits of operators’ ability to “make promotional offers, such as free spins, bonuses and hospitality, either within or separately to VIP schemes.”

UKGC: FIT OR UNFIT FOR PURPOSE?
The UKGC has been routinely slammed by parliamentarians as far too cozy with its licensees, a view that may have contributed to the regulator’s penalty fees rising 50% in its most recent annual report. The government notes that the UKGC’s funding is set by parliament, while other regulatory bodies have “greater autonomy” in determining the level of funding they require.

The review wants to know whether the UKGC’s current powers are sufficient to “effect change in operator behavior and raise standards.” The government also seeks input as to the size of the UK’s unauthorized online gambling market and whether consumers can tell if they’re playing on a UK-licensed site.

COMPLAINTS AND REDRESS
The government notes that UK online operators’ primary alternative dispute resolution (ADR) provider refused to handle 13% of the complaints it received in its most recent report because “it considered them matters of regulation.”

That leaves many customers with no other option but to pursue the matter in court, a “costly and time consuming” process. The government wants to know if a gambling-specific ombudsman might offer customers easier means of redress.

As for when operators’ redress involves financial compensation due to social responsibility failings, the government notes that there are risks in handing problem gamblers great wads of cash, as well as setting up a sense that gambling “can be ‘risk free’” if losses can be clawed back by crying wolf.

AGE LIMITS
The government announced Tuesday that it would raise the minimum age for playing the National Lottery from 16 to 18 years. The government is now consulting on whether to impose a similar age limit for the much smaller society lottery sector.

The government is also mulling whether to apply the 18-plus rule to  Category D gaming machines (coin pushers, crane grabs and slots with max stakes of 10p), as well as whether gambling operators need to impose extra protections for adults aged 18-25.

LAND-BASED GAMBLING
The government notes that land-based gaming is currently restricted from using cashless payments, which may make it difficult for land-based operators to compete with online rivals. The government is also considering whether to ‘de-anonymize’ land-based play (similar to new account-based slots rules in countries such as Finland).

Among the more interesting questions the government asks is whether to allow land-based casinos to offer more electronic gaming machines, an odd move given the government’s restrictions on fixed-odds betting terminals in betting shops. The government also wonders whether pubs might be allowed to “moderately” increase their current limit of two fruit machines without having to apply for special permission.