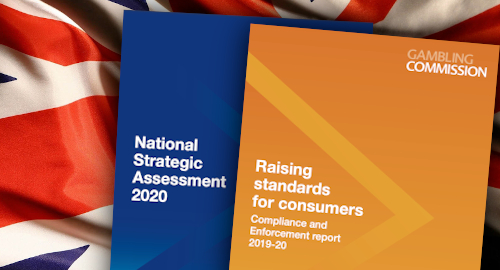 The UK Gambling Commission (UKGC) dramatically boosted financial penalties against licensees in its most recent fiscal year, while warning operators not to take advantage of consumers during the country’s second pandemic lockdown.

On Friday, the UKGC released its latest Compliance & Enforcement Report, detailing the efforts it took in the 12 months ending March 2020 to ensure its land-based and online licensees stayed on the straight and narrow path, as well as the penalties it imposed when operators chose to colour outside the lines.

The UKGC issued 12 financial penalty packages or regulatory settlements in 2019-20 worth over £30m, a more than 50% hike from the £19.6m collected from regulatory slackers in 2018-19. The UKGC suspended five operating licenses, revoked 11 and commenced reviews of 49 personal management license (PML) holders.

UKGC CEO Neil McArthur said the 2019-20 report showed the regulator wasn’t afraid to “take tough action” against its licensees. McArthur added that the UKGC’s growing focus on “those in boardrooms and senior positions” should leave no doubt that it would “continue to hold people to account for failings they knew, or ought to have known, about.”

The UK undertook its second pandemic lockdown this week, and McArthur warned online licensees that the “tighter measures to protect consumers during lockdown” the UKGC issued during the first lockdown this spring still apply.

Among the areas of major concern are not exploiting consumers’ isolation for marketing purposes, particularly when it comes to cross-selling online gaming products to sports and race bettors. Customer affordability checks – the subject of a new UKGC public consultation – are also high on the regulator’s watchlist.

Friday also saw the release of the UKGC’s first National Strategic Assessment, a summation of the “key issues faced in making gambling fairer, safer and crime-free.” The report offers a variety of stats on the who/what/where/when/why of UK gambling and the UKGC’s role in it.

There’s nothing particularly new in the report, which may have been intended as a rearguard action against increasing calls by some politicians for a top-to-bottom overhaul of the UKGC. Just this week, MP Carolyn Harris was quoted saying she didn’t see how the UKGC “can continue in its current form … this is not an organization that needs tweaking; it needs changing completely.”

But the UKGC is also aware that the government is preparing to finally launch its review of the Gambling Act 2005 and could be trying to ensure that whatever changes are made are made based on hard data rather than hyperbole.