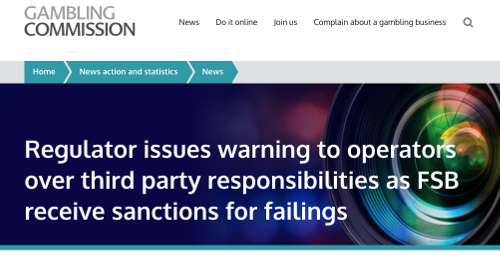 UK gambling operators need to mind their white-label partners’ activity unless they want to make six-figure financial settlements with the local regulator.

Last August, the UKGC announced that it had put FSB’s license under review based on suspected shenanigans by its Blackbet white-label partner. FSB subsequently announced that the UKGC had “expressed concern over the levels of due diligence performed on a small number of our white label partners.”

UKGC executive director Richard Watson said Wednesday that FSB’s offending licensees had committed “blatant breaches of rules we have put in place to ensure gambling is fair, safe and crime-free.” Watson further warned that the UKGC would “hold all licensees fully responsible for third-party relationships” and licensees “that do not manage third parties appropriately” should expect a trip to the regulatory woodshed.

WHAT WENT WRONG
The UKGC found that FSB “repeatedly failed to comply” with its license conditions during a period spanning January 2017 to August 2019. The failures were due to FSB failing to conduct “sufficient due diligence” prior to entering into its relationships with the three unspecified firms to ascertain their suitability.

In one case, a customer of one of these third parties gambled and lost £282k without providing adequate source-of-funds (SOF) evidence. The third-party site had allowed a VIP manager to operate without adequate oversight and without having received sufficient anti-money laundering (AML) training.

The UKGC further found that FSB had failed to conduct interactions with customers who displayed signs of problem gambling, effectively offloading the responsibility onto its third-party partners. One third-party site also sent marketing emails to 2,324 customers who’d previously self-excluded from the site.

The UKGC noted that, despite FSB’s business model, “responsibility for compliance remains with FSB and cannot be transferred to any other party.”

FOOTBALL ASSOCIATION PROBED
One FSB partner operated a betting site using “an international website brand name associated” with the partner. However, the same brand was also being used by “an international gambling operator not licensed to offer gambling facilities” in the UK.

The UKGC said the motivation behind this deal “seemed to be to raise the international gambling operator’s footprint worldwide” through “advertising associated” with English Premier League football.

This appears to be a reference to 1xBet, which shut its UK-facing site shortly before the UKGC announced its review of FSB’s license. At the time, 1xBet had betting partnerships with UK football clubs Chelsea, Liverpool and Tottenham, all of which were cancelled in the aftermath of the UKGC’s announcement.

1xBet is also likely to be the third-party site that the UKGC accused of placing a banner ad containing cartoon nudity on a UK-facing website “providing unauthorized access to copyrighted content.” 1xBet has earned a reputation as one of the most prolific advertisers on pirate video file-sharing sites.

The UKGC noted that FSB had taken steps to shore up its compliance and had cooperated fully with the regulatory probe, but also found that FSB’s senior management “were likely to have been aware of and, if not, should have been aware of, the governance issue that led to the breaches, given their significance.” The UKGC noted that it is “still reviewing the actions of personal management licence holders involved in this case.”