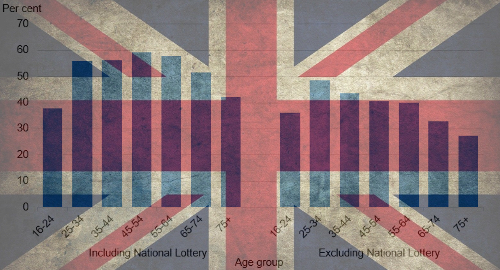 Over half of UK residents aged 16 years or older reported spending money on some form of gambling in 2018, although problem gambling rates continue to decline.

The results of the National Health Service’s 2018 Health Survey for England (HSE) show that 53% of UK residents aged 16 or over spent money on gambling last year, although that figure drops to 39% once you exclude individuals whose sole gambling activity was the National Lottery.

The figures are significantly higher than the UK Gambling Commission’s 2018 gambling report, which found an overall participation rate of 46%, dropping to 32% once you exclude National Lottery products. However, the HSE stats are below statistics published in 2016, so choose your own narrative and/or adventure.

In terms of online gambling (excluding the Lottery), the HSE found that 8% of respondents had bet online with a bookmaker last year, while only 3% had played online slots, casino or bingo games. As might be expected, the online betting numbers were significantly higher for men (13%) than women (3%), while men’s online casino participation (4%) was twice that of the female score.

Based on DSM-IV parameters, the HSE survey showed an overall problem gambling rate of just 0.5%, with slightly more men (0.7%) than women (0.3%) making this dubious grade. The rates were highest (0.8%) among those in the 16-24 and 25-34 age demos, largely due to outsized rates among men in those age groups.

The figures were even lower based on the Problem Gambling Severity Index (PGSI), with 0.21% of men and 0.1% of women fingered as problem gamblers. Factoring in both PGSI and DSM-IV criteria, the overall rate was still a modest 0.5%.

The 2018 rate of actual problem gamblers represents a significant decline from 2016’s figures, while those deemed to be ‘at risk’ of becoming problem gamblers has remained stable. Yet the usual suspects in the UK media are now complaining that their multi-year efforts at demonizing gambling have yet to completely eradicate the activity. Truly, when your instrument can only blow one note, the tune gets old quickly.