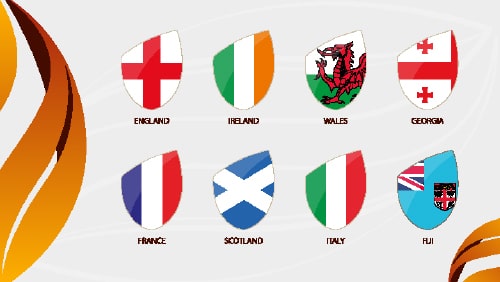 The Autumn Nations Cup continues with the second round of matches for the newest tournament on the international rugby calendar.

There were no surprises in the opening round with England asserting their credentials as favourites to lift the trophy. Four matches are pencilled in for the second round this weekend, but Fiji’s match against Italy remains under serious doubts.

Four members of the Fijian squad have tested positive for COVID-19 and the tight schedule may see Fiji miss another week of rugby. Fiji were unable to field a competitive side in week one, and face a race against time to field a side for the second week in succession. Organisers are expected to wait until the last possible moment before making a decision on whether to proceed with the match.

Below are our tips for the second round of the Autumn Nations Cup.

The duo were unable to finish the match against Wales, leaving Farrell with some tough choices for the game against England.

England coach Eddie Jones will be hoping to take advantage of Sexton’s absence with playmaker Owen Farrell in red-hot form. Injuries will hurt Ireland’s chances this week and expect England to finish the stronger of the two sides.

Both of these sides are coming off opening-round losses, with Georgia beaten by England and Wales falling to Ireland. It’s been a tough year for the Welsh since the 2019 World Cup in Japan. Wales struggled to make an impact against Ireland the match-up against Georgia will be a significant test. Georgia have won four of their last six matches; with all of the wins coming against second-tier nations. Wales should be able to find something special to avoid an upset loss.

The French team competed in the domestic rugby competition after their match against Fiji was called-off. Scotland continued their good Six Nations form to record a 298-17 win over Italy in the opening round. France were unlucky to finish third in the Six Nations and should prove to be too strong for a brave Scottish side.