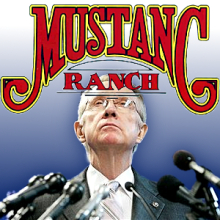 The online poker world is abuzz about the latest effort by US Rep. Barney Frank (D-MA) and Rep. John Campbell (R-CA) to kickstart pro-poker legislation in the House of Representatives. The bi-partisan pair previously worked together on Frank’s 2267 bill, which passed a committee vote in July but died without ever being discussed on the House floor. Now they’re taking a stab at rejigging Sen. Harry Reid’s failed effort to sneak a pro-poker bill through the lame duck session of the 111th Congress. Speculation is that the new & improved version would eliminate the 15-month blackout period, which would please the players but isn’t likely to do much to change the minds of anti-gambling politicians, such as Rep. Spencer Bachus, the new head of the Finance Committee. In other words, don’t get too attached to this new bill, because she ain’t gonna make it.

Speaking of Reid, his solidarity with US citizens who crave the personal freedoms enjoyed in many other countries appears strictly limited to poker. Speaking to state legislators on Tuesday, Reid said it was time for cash-strapped Nevada to have “an adult conversation about an adult subject.” Reid believes that if Nevada’s economy is going to recover, it needs to attract new businesses, but these companies won’t come because Nevada has “the wrong kind of red lights.”

Nevada has two dozen legal brothels located in rural areas of half of Nevada’s counties. They pay license fees to their home counties, but pay no state tax. During the height of the economic downturn, the Nevada Brothel Owners’ Association offered to begin paying state tax, but legislators brushed the offer aside. After all, it’s not like they could really have used the money or anything.

Harry Reid believes the brothels, which you can’t really see unless you go out looking for them, offend the eyes of hypothetical businessmen with prudish worldviews. Reid wants to rid his state of a perfectly law-abiding industry in the hope that a horde of hypothetical companies will drive out to Nevada en masse, like the convoy of cars heading for Ray Kinsella’s baseball diamond at the end of Field of Dreams.

Which is crazy, because no forward-looking company is coming to Nevada. As the planet continues to heat up, the snowpack in the Rocky Mountains will decrease. This means reduced flow down the Colorado River from which Nevada draws almost all of its water. It doesn’t matter how morally upstanding your desert community is, it can’t — and it won’t — survive without water. That’s probably of far greater concern to most smart businessmen than the indistinct blur of a brothel sign on the distant horizon.

In other words, Nevada’s economy may have to get by on the businesses that already call the state home. Nevada’s brothels are extremely popular with men of all (legal) ages. No doubt they bring a lot of out of state dollars into other avenues of Nevada’s tourism industry. So, Harry… Please. No more pipe dreams. Forget the two in the bush… In fact, forget the bush entirely and go for the girl with the Brazilian undercarriage. Be nice to her and she’ll love you long time.