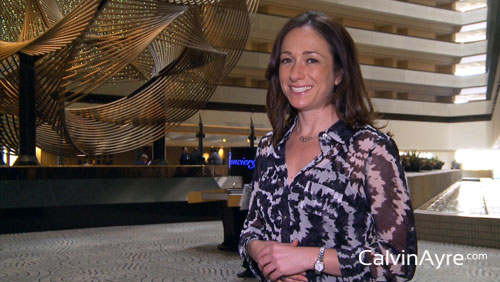 The first day of GiGse 2015 has kicked off at the Hyatt Regency in San Francisco, an event dedicated to the regulated US iGaming market and surrounding industries such as social casino, real money skill games and daily fantasy sports.

So far the event feels busy, intimate and well attended with one room dedicated to booths, food, refreshments and networking and two additional rooms dedicated to panels, presentations and Open Space sessions.

Unfortunately due to Union restrictions, CalvinAyre.com were stopped from filming anywhere within the conference, but we’ll do our best to provide you with still visuals from the panels and Open Space sessions so you can get a feel for what was happening on the floor.

Today’s “Outside-in Debate: iGaming 2015 and beyond” featured Lawrence Vaughan of Real Gaming, Matt Davey of NYX Gaming and Chris Sheffield of Penn National Gaming Inc, a panel of innovators as pointed out by moderator Julian Harris.

Vaughan is known for being the youngest person to receive an interactive license in Nevada to date and also for creating proprietary HTML5 software for his online poker site as opposed to signing on with a platform such as 888.

When asked what he thinks of the Nevada iPoker market results so far, he said Real Gaming’s business model was based on gradual progress and he’s not surprised with the numbers to date. 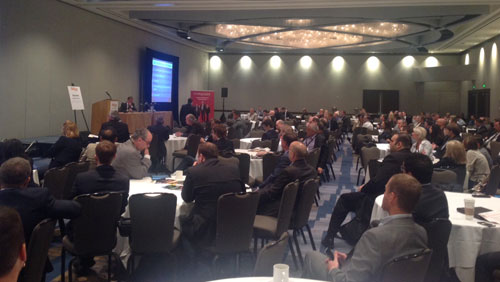 Something emphasized by Vaughan is the need for education- education for players and land based operators.  Vaughan said a big question he gets from customers is why they have to provide so much information during the sign-up process, an example of how education could alleviate consumer concerns.

His thoughts are the operators should come together and educate the masses collectively – he said having less greed and working together should speed up the process of growing the industry across America.

The panel also discussed land based operator fears of cannibalization and even though its been proven to be a non-issue in the mature UK market, there are still concerns about it.  Vaughan said its all about education when it comes to B&M concerns such as this one and Davey pointed out we can see more players coming to New Jersey casinos since online gaming has been launched.

As a quick side note, when asked, all three panellists predict it will be at least five years until we see some real action in the US market.

Next up was “Live Debate: Dissecting New Jersey” panel featuring Jim Ryan of Pala Interactive, Thomas Winter of Golden Nugget, Rich Roberts of Sportech and George Rover of the DGE.

Ryan spoke quite positively about the New Jersey market despite its “disappointing” revenue numbers thus far.

“The 1.1 billion forecast is old news, we’re focusing on the negative”, he said.  Rather, lets focus on the fact that we have a market that is regulated in the US, a market in which customers can feel confident they won’t be ripped off, something that has certainly happened in the past.  “Every single market that looks into regulating will look at New Jersey as a model, there fore it is a success”, he said.

When it comes to “illegal sites” offering services to New Jersey, Rover explained the DGE would need the federal government to work with them to get anything moving and its difficult to get the Feds’ attention because they are dealing with things like terrorism.  Rover suggested blocking IPs and more accountability from affiliates are several ways of going at it, but also made the point “it’s a very difficult problem which is why no one has solved it quite yet”.

The entry of Amaya/PokerStars into the New Jersey market was inevitably discussed and Ryan said his company has taken the viewpoint that its likely it will happen.  His hope is Stars’ entry will create consumer awareness and therefore create more revenue for everyone rather than cannibalize the other operators in New Jersey.

Interstate compacting was also covered and Rover confirmed the DGE has had productive discussions with regulators in the UK and there is some hope for the future.  He also confirmed the DGE is working behind the scenes on proposals that will show more interaction between the three regulated states and said “in the future it will happen”.

Rover also said international liquidity will likely be left on the side table until the RAWA situation has passed (best not to provide Sheldon with any more ammunition).

While the Regulation, Policy and Public Awareness Open Space session took place we sat in on the “Appealing to the ‘millennials’” panel, featuring David Chang of Gamblit Gaming, Eric Weiss of the DGE, Mike Stewart of YWS International and Vaughan of Real Gaming.

Chang explained that yes, millenials are different, but they are looking for that same kind of rush other generations have been looking for in casino games, its just the content is different.  He said its our job to find out what is going to bring the millenials around the table together.  “We’re trying to increase the entertainment value because we know that’s what this demographic is interested in”, he said.

“Engagement is everything”- once you have them engaged you can monetize, he said.

According to Chang, one of the challenges with millenials is they have many things demanding their attention and therefore demand a compelling experience immediately.  Although we may view this as a big challenge, the panellists pointed out it can also be an opportunity to innovate and a new way to look at games- so “its awesome”, they said.