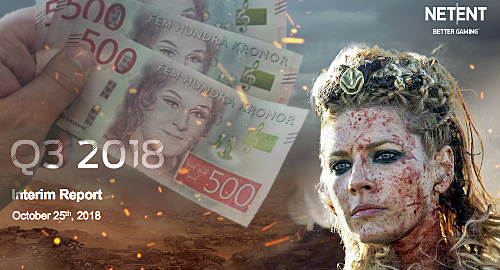 NetEnt CEO Therese Hillman (not pictured), who assumed command after former chief exec Per Eriksson was unceremoniously sent packing in March, hailed the release of NetEnt’s new Jumanji game for getting Q3 off to a strong start, while a focus on lowering overhead and increasing the pace of game output helped sustain that momentum.

These new market entries will go a long way toward righting NetEnt’s ship after a disappointing 2017, which saw the company forced out of Australia, Poland and the Czech Republic following new online regulations. The combined effect of these market exits was a 3% fall in NetEnt’s overall revenue.

NetEnt’s customers handled 10.9b (+7.2%) transactions in Q3. Mobile devices accounted for 61% of transactions, nine points higher than the same period last year. Slots accounted for 91.6% of Q3 game win versus 8% for table games and 0.4% for ‘other’ products. Hillman said the company has plans to add tables to its fledgling live casino product later this year and throughout 2019.

Locally regulated markets accounted for 35% of NetEnt game win, up three points year-on-year. Sweden provided 14% of game win, while other Nordics claimed a 17% share and the UK a 14% slice, while the rest of Europe improved five points to 42%.

NetEnt warned that the January 1, 2019 launch of Sweden’s regulated online market comes with an 18% revenue tax for Swedish-licensed operators, which will in turn have a negative effect on NetEnt’s 2019 revenue.