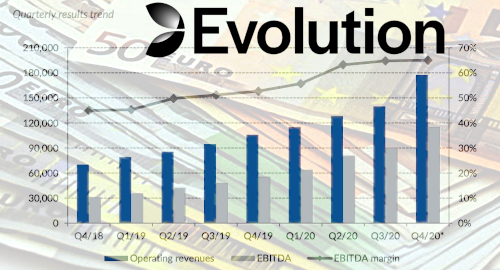 Evolution’s game-changing acquisition of RNG casino tech provider NetEnt was completed on December 1, but Evolution said NetEnt’s Q4 revenue contribution of €17.8m was up only 5% year-on-year. In other words, Evolution largely achieved its stellar quarterly results on the strength of its market-leading live casino offering.

Geographic expansion helped push Evolution’s operating expenses up 62% to €92.8m, although €12.4m of this relates to NetEnt, while restructuring and acquisition costs combined for €19.4m.

It’s probably not surprising that Evolution CEO Martin Carlesund says he’s “excited about what lies ahead for 2021” (fearless prediction: it probably involves counting great stacks of money). Carlesund says it’s currently “an intense time” at Evolution HQ due to its planned release of new products this year, following the launch of the world’s first live craps product in Q4.

It’s also an intense time for many NetEnt staffers, whose ranks were significantly thinned following Evolution taking control. Carlesund said it was essential for the firm to ‘discard existing structures’ and the expected annual ‘synergies’ of the acquisition are now pegged at around €40m, some €10m greater than previously communicated. These savings will “happen gradually” in the first half of 2021, about nine months faster than originally anticipated.

To cheer up the survivors of this purge, Evolution recently announced a new incentive program in which 200 staff – including Carlesund and other senior management – can acquire warrants within the company. A pool of 5m warrants can be exercised for subscription of Evolution shares until March 20, 2024.

Both Evolution and NetEnt made their names in Europe but geographic expansion has been the watchword for some time now. Evolution launched a live casino offering in Pennsylvania in Q4 and more recently launched NetEnt games in Michigan’s new regulated online market. A live casino studio is under construction in Michigan.

That Asian black-market growth came courtesy of the shutdown of many Philippines-based live casino studios as the country struggled to gain control of its pandemic infection rate. However, the outsized Asian gains pushed Evolution’s share of revenue from regulated markets down four points year-on-year to 36%.

Evolution’s major shareholders include Ian and Richard Livingstone, and Bloomberg reported this week that the brothers’ combined gains to date from their Evolution holdings were around US$3b, representing a 5,000% return. Last July, Bloomberg reported that Richard was looking to cash out 8.5m Evolution shares to offset pandemic-related losses in his real estate holdings.