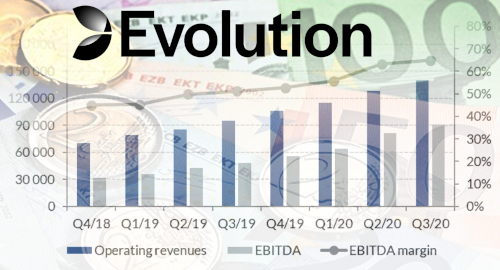 Online gambling technology suppliers Evolution and NetEnt are both living their best lives as earnings soar ahead of the companies’ proposed merger.

Figures released Thursday by the Stockholm-listed Evolution (formerly Evolution Gaming, until a corporate rebrand dumped the ‘Gaming’ earlier this month) show the company generated revenue of €140m in the three months ending September 30, up 48% from Q3 2019. Earnings rose 87% to €90.7m while profit doubled to €79.4m.

Evolution CEO Martin Carlesund hailed Q3 as “a period of exceptionally high activity” thanks to the pandemic suspension of major sports creating a boost in online casino activity across the globe. Evolution customers reported their players making 12.9b individual bets in Q3, up from just 5.8b in Q3 2019.

The pandemic did result in limits on Evolution’s live casino studio operations but this also kept expenses down and the company is “slowly coming back towards pre-COVID levels in number of tables.” Since the quarter ended, Evolution has launched its first live tables in Pennsylvania and a new “medium sized” studio in Kaunas, Lithuania.

Carlesund said Evolution’s new game show product Crazy Time, which launched July 1, has proven to be its “most successful game launch to date.” Evolution also launched an Instant Roulette product and Instant Craps is set to follow in the current quarter.

Evolution’s geographic revenue split underwent some significant changes in Q3, as Europe (excluding UK and Nordic markets) shot up 41% year-on-year to €65.6m, while Asia more than doubled to €34.8m and North America rose 50% to €9.2m. The Asian surge pushed Evolution’s share of revenue from regulated markets down 10 points to 32%.

Carlesund noted that Germany’s transition to a strictly regulated online casino market will have a “negative” but “limited” effect on short-term operations, as German players currently account for 5-10% of total revenue. But Carlesund claims the long-term regulatory picture will prove a positive for the company.

Evolution has extended the deadline for shareholders to accept its proposed takeover of rival NetEnt from October 30 to November 20 to account for the expected November 16 decision by the UK competition watchdog as to whether the merger is anti-competitive.

It should be noted that these outsized gains were largely due to last September’s acquisition of rival Red Tiger Gaming and its subsequent integration into NetEnt’s operations. Absent Red Tiger’s contributions, revenue would have risen a more modest 9% year-on-year.