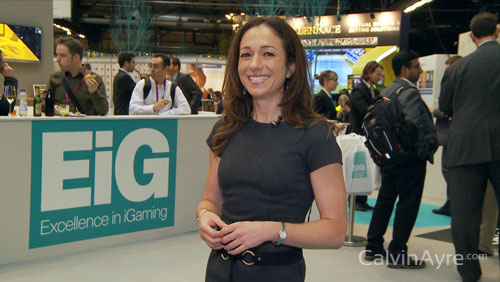 Today marked the first day of EiG 2015 and the B2B gaming industry has gathered for the second year in a row at the Berlin Arena to network, attend sessions and have some fun.

The event felt busy today, with the usual buzzing crowd around the Microgaming Bar and sharply dressed attendees making the rounds. Exhibitors are mainly Euro-facing, with a mix between start-ups, software providers, regulators and other B2B industry suppliers.

Over the past few years EiG has had a big focus on innovation and start-ups, but this year the dedication has been stepped up a notch. Clarion’s partnership with GamCrowd has developed into a more seamless experience for start-ups between ICE, GiGse and EiG, with the more established start-ups finding a home now at EiG.

Chris North, CEO of GamCrowd, confirmed EiG is an opportunity for more established start-ups to show off their products while ICE is more geared towards new start-ups who are only just getting their products off the ground.

North also took us for a tour around EiG’s “start-up village”, a section of the EiG floor dedicated to start-up companies, five of which who will be participating in the EiG Launch-Pad competition on Thursday. This year the village featured Skillzgaming, eSportsPools.com, RTSmutiny, Strategem Technologies, Casino VR, Fresh8, DupZapper and Gamevy.

Gamevy was crowed the winner of Pitch ICE 2015 and eight months later have emerged at EiG as a much more established company and Start-up Launchpad finalist.

Helen Walton of Gamevy told CalvinAyre.com of all the developments since ICE including the launch of four new games, translation of their content into German and wheels in motion for translation into Polish, Swedish, Czech and Portuguese. She also praised Pitch ICE for introducing Gamevy to Lottoland, a partnership enabling Gamevy to offer a much larger jackpot across all games, from 10k to 1 million, to be precise.

When asked about Gamevy’s presence at EiG Walton said, “Honestly, this is the first time we have made a concerted effort to find customers. Previously we wanted to launch directly to customers and now we have a different route than we originally planned”.

Casino VR, also an EiG Start-up Launchpad finalist, has taken virtual reality to the next level for gambling. Marco Kobelt of Casino VR told CalvinAyre.com their product goes beyond slots and other casino games, rather the focus is poker and how players can watch the reaction of other players around the poker table- if they looking at their cards or not, for example- truly mimicking an actual experience at the poker table in a casino.

In general EiG is a great event for pitching innovative products to delegates, regardless of booking a booth in the Start-up Village. Industry veteran Keith McDonnell praised EiG as an ideal opportunity for him to talk about a new product on the football betting market, Football Index, a product offering stock market trading for footballers.

For duration of EiG, running alongside all the action on the expo floor and Microgaming bar, are several conference tracks addressing key trends we can expect in the future, key issues in the present and a deep dive into more technical topics.

Laslop emphasized how regulation gets the banks and other debt providers much more comfortable and anything that de-risks the industry is good and will help consolidate. McIver agreed and said there are three reasons to move forward with M&A’s:

When it comes to cutting cost, reduction in staff and/or migration from two platforms into one are several ways to accomplish this. McIver used the example of SportingBet’s acquisition of Centrebet and how Centrebet’s 100+ team was shaved down to 20 and the two companies were put onto one platform. “Any way to reduce costs is worthwhile”, he said.

However, McIver did warn that M&A is not always the answer. “M&A is not a get out of jail free card, its very high risk. Merging two cultures is very high risk”. He even predicted there are studies available that prove shareholder value decreases after merger rather than increases.

“I don’t think if you put two weak things together that you get one strong thing in the end”, he said.

McIver pointed out opportunity for medium and even smaller companies with the flurry of M&As happening with larger companies. It will take the three bigger merging companies three plus years to sort themselves out and they will take their eye off the ball “creating a lovely slipstream for some of the other companies”, he said. For example, Bet365 must love the Coral/Ladbrokes merger, he added.

“Focus religiously on what your doing, keep costs down and sooner or later you will do well against the giants focusing on other things, or one of them will want to buy you”, was McIver’s message to small and medium companies out there.

Other points discussed during the session were key geographical areas for growth and Hughes highlighted China despite the nightmare of distribution within the country, Latin America as a promising area to explore and certain pockets of Africa. “As device saturation increases, this allows access to proper game play in the palm of your hand”, he said.