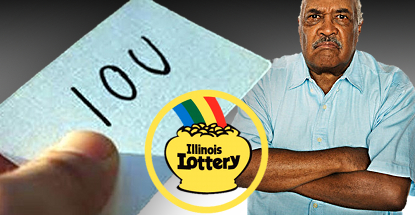 The Illinois Lottery has stopped paying jackpot winners due to the state’s budget crisis.

The state’s fiscal year began July 1 but bickering politicians have yet to pass a budget. As such, the state is only distributing funds for essential services, which evidently doesn’t include the Lottery. But the Lottery is a state agency, and it says it has been forced to stop processing payouts of jackpots over $25k.

Lottery spokesman Stephen Rossi insisted that the money is in the Lottery’s accounts and that “all winners will be paid in full as soon as the Lottery and the Illinois comptroller have the legislative authority to do so.” Lottery winnings of $600 or less can still be cashed at participating retailers, while prizes between $600 and $25k can be redeemed at official Lottery claims centers.

Jackpot winners are understandably miffed at the Lottery’s stalling, but it’s unclear whether the bad publicity is having a negative effect on sales. Meanwhile, one local wag couldn’t help reminiscing that the infamous Chicago Outfit bookies were far better about paying their winning bettors because they knew not doing so was bad for business.

BLOWING TAPS FOR MINNESOTA LOTTERY’S ONLINE SITE
Illinois was the first US state to offer online sales of traditional lottery draw tickets while Minnesota made history by being the first state lottery to offer online scratch tickets. But the online scratchers’ similarity to slot machines irked local politicians, who passed legislation ordering the Minnesota Lottery to curtail their use. The Lottery’s online site went dark at 11:59pm on Sunday, while a separate program under which draw tickets could be purchased at ATMs and gas station pumps ended on Friday.

Any unplayed eScratch tickets have been ‘force played’ by the Lottery and any winnings credited to players’ online wallet. Players will have until Sept. 14 to withdraw funds, after which the state will close the accounts and mail players checks to cover any remaining balances. Meanwhile, the state has yet to come to an arrangement with the vendors who supplied the technology over compensation for the early termination of their contracts.