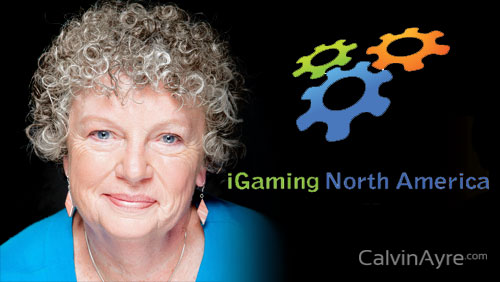 We all know there are a disproportionally large amount of online gambling industry conferences for the relatively small size of our industry.  Its tough work “selling” an event in this saturated environment, but the folks behind iGaming North America seem to have found the right formula and do a good job attracting those interested in the regulated US iGaming market.

The fifth annual iGaming North America takes place at Planet Hollywood April 14-16 in Las Vegas.  Sue Schneider of eGaming Brokerage, also one of the organizers of iGaming North America, has extensive experience in the industry and also with organizing conferences in our space.

After talking with Schneider, its clear to me one of the main strengths of this conference relates to the organizers’ backgrounds- they all have practical day-to-day experience in the iGaming industry.  Another strength is the personal touches we find added into the event each year.

During this interview with Schneider, we learn more about the unique strengths of this event, what topics are due to be covered during the sessions and what is new this year for delegates.

As you know better than most people, there are tons of conferences every year – so many to choose from – so what separates iGaming North America from some of the other events, especially the events addressing what’s happening in the regulated US market?

First of all, the partners that put this on all work day to day- we’re gaming attorneys, consultants, people that work day to day in the industry, so I think this gives us a leg up on knowing what the issues are that our clients and people that we interact with daily are concerned about and interested in.  The other is cost, because its probably the most reasonably priced and Las Vegas is a relatively inexpensive place to stay.

I think those are probably the main ones, we’re also very very fortunate that we’ve been able to draw probably the highest number of operators there – we have tribal operators, commercial interests and lotteries.  I think last year we had about twenty seven percent or so of the six hundred people were operators and that’s who people want to talk to, obviously, if you’re a supplier or a regulator or whatever, so we’ve been fortunate in that regard.

Very good. And so you say a lot of people on your board, they’re familiar with the issues happening right now in the US market.  Can you highlight some of issues that are going to be tackled and addressed while we’re at Planet Hollywood?

Sure!  So one of the things we’re obviously going to be talking about is some of the new products that are out there like the social casino games and fantasy sports.  We have a session that will be run by the folks of Draft Kings to give an overview of what’s gone on so far, where its going, just the whole phenomenon that it is.

We have a visionaries panel that’s going to be, you know there’s been a ton of consolidation lately, so we’ve got folks from Amaya, Sci Games and 888, Gtech now IGT, so just trying to take a look at what that means from a supplier standpoint, that you have this level of consolidation.

I think a couple of other areas that we’re concentrating on, we have a very interesting payments panel, Matt Katz from CAMS is moderating a panel with folks from MasterCard, Wells Fargo Bank and PayPal.  I was in on their organizing call the other day and I think we’ll start to get a better sense of why things are the way they are and what the prospects are.

We have an interesting “state of the states” panel and we’ve been able to get key legislators from California, from Pennsylvania, from New York as of yesterday.  So I think those are the types of people we’re looking to, to get a better sense of some of those key states and whether they’ll move forward.

And the last point I want to bring up is looking at sportsbetting.  We’re going to have a mock trial again about the New Jersey case which should be kind of fun too, but we have a sportsbetting panel that includes folks from ESPN, Don Best and Senator Lesniak.  I think we’ll get a good idea of what’s going on with that, and we just heard yesterday that we’re actually going to get a taped message from Senator John McCain about his thoughts on sportsbetting because he’s now come out saying we should have some hearings, we should have some debates, so we’re pretty excited about that.

That’s really cool and I remember the mock trial from last year and it was hilarious [laughs] and educational, but it was fantastic.

And the woman that was there deserved an Oscar – she was actually in tears.

She was amazing.  I’ve been to all of the iGaming North Americas so far, or most of them at least and I love the personal touches and the fun aspect of the event as well.  This year I know you have a band put together with some names we should recognize, can you tell me about “Bet Beats”, I think is what you call it?

Bet Beats- ya, you know in getting to know more people in the industry I found we have some very talented musicians.  So we thought it would be fun to put together our own little garage band and so we’re going to be doing that on the opening night reception giving them some time to get some tunes out there- its Jason Rosenberg and John Roberts who is a Tribal Gaming Regulator [Adam Krejcik, Frank Legato, Jason Stage] but ya, that’s going to be fun and its just an opportunity to have a little fun and showcase some talent that we have in the industry that, who knew?

I can’t wait.  I know new this year are some awards that you have as well.

Yes, and you’ve placed them during the lunchtime program, so can you elaborate on what the awards are all about?

One of our partners is iGaming Business and clearly they’re kind of the masters at doing awards and so what we decided to do was to initiate that.  Its going to be different than the other kinds of awards, things that cost you an arm and a leg to go to, and we want to just recognize people and basically have a little fun with it and just show there is some good work being done.  We have I believe seven different categories and we’ve got the applications in now so we’re moving forward with putting that together for the third day during lunch.

And we’ve got a couple of other networking things going on, we are going to go with another Global Gaming Women event, that will be the lunch on the first day and we have a product that we’ve used for three years now called Presdo Match.  It’s a really good tool to be able to find out who’s there and be able to reach out to them directly.  We always hear as organizers, can I find out who’s here from name a state or name a company, and so we have an opportunity to do that and it gets a lot of really good use.

And we have these lunch table things we call “Food for Thought” that is basically just allowing for people to talk about marketing or payments, I think again we have seven or eight different topics on that, its an informal way for people to get together and network because that’s obviously what a lot of people come for.

I do want to add one other thing that we just added too, we’re going to have a closed session the first morning – we extended the hours some- for government folks.  So it will be a closed door session for regulators, for policy makers, for lottery people, and Jeffrey Haas from Bwin.Party is going to be doing that and Susan Hensel from the Pennsylvania Gaming regulators will be moderating that, but the intent with that was to try and show there needs to be a balance between commercial interests and regulations and that if it gets too heavy-handed then you have a dysfunctional system.  I think it will make for some really good debate and interaction between the government folks and some private sector folks.

Sounds like you have a really nice mix between some hard core content and speakers and also a little bit of fun as well.

Oh yea, you have to.

Well we’re really looking forward to your event and thank you very much for sharing some of the details with me today.

I appreciate it and we’ll be looking forward to seeing you there.