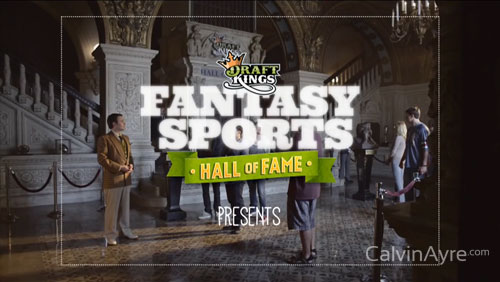 Becky Liggero talks Jason Robins of DraftKings. He talks about DraftKings’ single day competition in fantasy sports league. He also shares why is there such a connection with DraftKings and the poker world.

Becky Liggero: I am here today with Jason Robins, the CEO of DraftKings, which is a fantasy sports website US facing. Jason, you guys have a single day fantasy and this is your new thing. Can you explain to me the phenomenon.

Jason Robins: Fantasy sports itself has been a really growth area of sports market. Only about 10-15 years ago, when it really started to take off and over the last 5-10 years, it exploded and there’s about 40 million fantasy sports players now. This is really the new innovation in that space and it’s taking the traditional game. And instead of requiring somebody to play for the entire season, letting them play for one day or in case of football, one weekend’s game. It just really opened up a new market a people that want that short-term experience. It is very complimentary to traditional fantasy product and it’s still very early stage. We’ve only gotten about 2-3% of the 40 million fantasy players that are playing. Right now it’s growing like crazy; we are up about 8x year-over-year revenues; 12x in our players. And it’s just exciting to be a part of that.

Becky Liggero: You guys definitely filled the gap in the American sports betting market. And what can you attribute to this tremendous growth of fantasy sports in America?

Jason Robins: There’s a lot of people who want to be able to get action down and what DraftKings allows is for you to come in and win money that day in the sports that you love. So for somebody, who is already a fantasy fan, who like that idea to being able to come and play a short game where it will only last one day and win money now, it was very appealing. And what’s really made it take off as this football season, the prize pools have gotten so enormous and it’s attracting a lot of action.

Becky Liggero: Thank you so much, Jason. This has been a pleasure.

This week alone, we have a game where you can buy-in for only $27 and the top prize is a million. We’re guaranteeing. So somebody’s gonna put in $27, pick an NFL fantasy football team for the weekend and come out with a million bucks. When you get to those sort of number, i think it starts to really attract and retain customers better and when we say last year we were offering $5K, $10K, $15K  prize pools.

Becky Liggero: You guy have also done a deal with WSOP. I was just wondering why is there such a connection with the poker world?

Jason Robins: So if you go and play DraftKings, it actually in many ways has a similar feel to poker. The game have payout structures that are similar and there’s a lot of different variety; we can play head to head, we have a larger tournaments. So if you basically take anybody who is into poker, who is a poker fan; they also happen to like sports. It’s a very natural fit. There’s lot of people who like sports. So being able to go to the poker market and attract customers in there has led us to a lot of great customers acquisition. I think for a poker player, it is just much easier to immediately get and understand the product. It is just a great place for us to advertise.

Becky Liggero: It is quite a bit of a cross-over there. I know that you guys also have a deal with the major league baseball and NBA is opening up their eyes with sports betting. what do you think all of these means with the legalization of sports betting in America.

Jason Robins: I think specifically for fantasy, the leagues have seen in the case of traditional season-long league, what it’s done for the game. I think they understand that what we’re doing is ultimately, extraordinarily positive for their game—it increases engagement; it brings new fan in. And by taking it and making it a daily or season-long or weekend-long game. It actually allows them to bring in new fans. Maybe they were intimidated to sign-up for the entire season-long product. So they love it. And i think also being able to point to the clear skill aspects of it. Right now, of course fantasy sports being a game of skill have carve out by the Unlawful Internet Gambling Enforcement Act (UIGEA) and permissible in most states in the US and being able to clearly point in the data to the skill aspect of it, i think has really helps to get the leagues comfortable that this is in fact what they think it is. My general view is that when most people want something, eventually it’ll happens. I think most people would like sports betting. I just think under the current law, it’s very obvious this fits within skill gaming. Something like sports betting would actually require change in legislation and to change things, which is a little bit more of a hurdle to overcome.

Becky Liggero: So let’s say the hurdle has overcome and the sports betting is legalized here, how would this impact the DraftKings’ business?

Jason Robins: It would be positive for our business. We found that our product is very complimentary to other forms of gaming in the sports world whether it’s sports betting or traditional season-long fantasy sports. We conducted market research and seen data that suggest that people actually increase their level of participation on those other things as they get to daily fantasy. I think for that reason, just having more ways for people to be able to participate will actually grow the market. Somewhere down the road perhaps though, there will be a wallet chair battle but that’s so far off with the US market but anything that accelerate the growth i think would be very positive to our product.