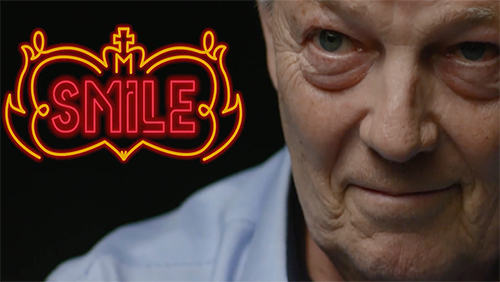 The latest example of poker on screen isn’t a glitzy Hollywood movie or a stylish cameo to bulk out a gangster film. It’s not a tournament or cash game highlights show, either.

Smile, produced by Norwegian filmmakers Kari Wåle and Linn Amundsen, is a documentary that follows the last steps of Thor Hansen’s journey in poker and in life itself. Diagnosed with incurable cancer, Hansen’s prolonged battle against the disease took in the making of the film and it one of the single most fascinating films you’ll ever watch.

It goes without saying that Thor Hansen is a poker legend, but the two-time WSOP bracelet winner is also a hero to Norwegians who play the game and it’s not hard to see why in a documentary where Hansen, despite the impossible battle he faces, is constantly smiling.

While the jovial Norwegian has not yet made his way into the Poker Hall of Fame, it is an induction that surely will come in time. He’s impossible not to like, not only because of his infectious lust for playing poker (“I’ll be playing on my deathbed, you guys can bring cards!”) but his humility and acceptance of his fate.

Lasting 75 minutes, this poker film is a deep dive into Hansen’s life and motivations, and it’s a study which is often upsetting, purely because his personality is so vital and his humour so touchingly infectious that throughout the movie one is struck by sadness that his isn’t around any more. He is missed in the current scene, though what he would have made of poker behind Perspex screens and face masks is anyone’s guess.

Hansen deals with his terminal cancer diagnosis like he might have dealt with bad cards he’s miscalled the flop with; accepting that he may lose the hand but determined to go down cracking jokes. It is a testament to his mental strength and while it’s not a theme of the movie, we couldn’t help wondering if his love of poker helped to prolong his life, given that he endured 300 chemo treatments and six years of such battles to continue living as long as he could.

Part of the film touches on his love of the game in its purest form and it seems to a large extent to have consumed him. The question isn’t posed directly, but lingers like sepia on old film anyway; is a whole life dedicated to poker something that is a good thing or bad for a human being?

There’s no correct answer, of course, purely because everyone is different, but while many of poker’s modern success stories have an ‘escape route’ planned, pivoting to Bitcoin or investment opportunities or a completely different gaming discipline, Thor Hansen hails from an era where poker consumed its players, and dominated their lives.

Passing away aged just 71, Hansen was by no means the oldest of men by the time he died and that is the big takeaway, how full of life he could seem to be while simultaneously rowing in tandem with those on the longest journey of all, life itself going into whatever lies beyond. His viewpoint on life and poker mix and meld beautifully and it’s clear that his love of the game runs like a second skin under his own.

A gregarious character of vast personal charm, it’s impossible not to love Thor Hansen. The filmmakers spoke to PokerNews about the project, telling the poker reporting site that, “We thought Thor deserved this film, and we also got the impression that he was a bit proud that we were making a film about his life.”

It’s impossible to argue with such a wonderful sentiment and the film, while capturing Hansen at his physical nadir in terms of his life, captures the essence of what makes him – and his wife Marcella – so special too.

You can watch the trailer for Smile right here:

If you want to buy the film, you can do so on Vimeo via this link.