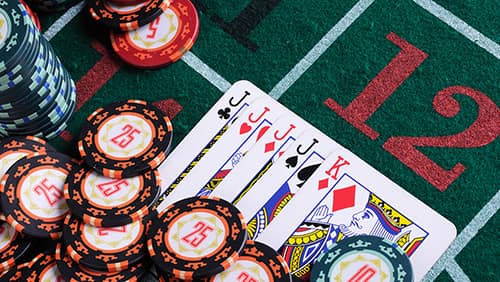 It’s impossible to ignore tragedy, and the COVID-19 pandemic has taught us that more and more each week. For many people, denial has given way to acceptance. For others, it’s not something they can comprehend, so they choose not to. A huge number of varied responses are all understandable, no matter how different they may be.

Each week, we write about poker and players take to the tables with a desire to focus on each event, each player, each hand. In a way, we ignore the pandemic ourselves a little in an effort to entertain, as everyone in the media does.

In the end, though, ignoring tragedy is impossible. Poker players who have taken to YouTube during the pandemic have tried, but perhaps the most triumphant broadcasters during this odd time in human history have been two men who are used to sharing a lot of time and bringing audiences into their world.

To say that The Chip Race is a successful podcast is a huge understatement. It’s the five-star hotel of the podcast world, providing every guest with everything they need from the metaphorical chocolate on the plumped pillow to a complimentary stay in the attendant spa. In the fine print, however, are a series of probing, personally revealing questions asked by two of the easiest guys in poker to talk to. As a result, the interviews are great, and the show is all killer and no filler.

That same welcoming feel easily transfers across to The Lock-In as O’Kearney and Lappin gently get their quarry to reveal some secrets from the poker world and it’s wholesome, entertaining fayre throughout. From high rollers to

During the pandemic, there have been a great many tragedies that have hit a lot of people hard. Every street seems to have a sad story hiding behind the brickwork, doesn’t it. We just don’t knock on every neighbour’s door. That’s true in a more global sense, and it was only in doing a little research for this article that we read of O’Kearney’s father’s passing, which the legendary poker player and ultra-runner writes about beautifully here.

Tragedies like that which O’Kearney has obviously suffered, are everywhere. The world is a fragile place, just like a poker tournament that might as well blow in the wind as a promised whisper before the tables and chairs, banners and final table lights are set in place. We’ve seen that during the pandemic, as players have had no real option at times other than to play in their own homes, sheltered from an invisible storm, reliant on WiFi to connect with friends, talking strategy or tragedy.

O’Kearney and Lappin are a double-act that entertain with a naturality that is irresistible. If you’ve missed The Lock-In during the pandemic, you may well have a good reason, but now’s a great time to start. There’s a comfort and happiness in sharing each episode with the award-winning broadcasters and talented poker players.

Here’s the first episode from the series. If you like it, then there are plenty more where this one comes from, with a total of 15 episodes so far. We’re loving them and think you will too.