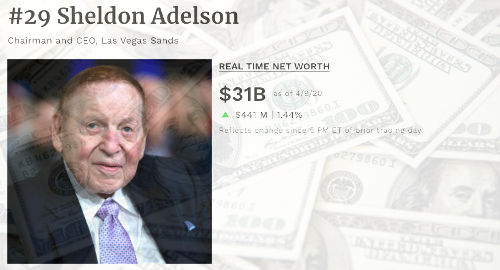 Casino boss Sheldon Adelson is once again the global gaming industry’s wealthiest figure, even if the COVID-19 pandemic is playing havoc with everyone’s net worth.

The annual Forbes ‘billionaires’ list pegs Las Vegas Sands boss Adelson as the gambling sector’s Daddy Warbucks with an estimated net worth of $26.8b. The 87-year-old Adelson ranks 28th on the overall Forbes list and was the only gaming industry figure to crack this year’s top-100.

Forbes introduced a new wrinkle for the 2020 list to reflect the volatility in the global economy caused by the coronavirus pandemic. The ‘real-time’ list now shows the daily fluctuation in the net worth of the 2,095 individuals who made the grade in 2020 and, as this was being published, Sheldon’s net worth was up 1.44% ($441m) from the day before, with his net worth having increased by over $4b since the original list was released.

Adelson recently showed a willingness to share some of his immense wealth by continuing to pay Sands staff furloughed by the shutdown of the company’s US casinos, and challenged other casino bosses to do likewise “for as long as possible.”

Macau casino operator Galaxy Entertainment Group founder Lui Che Woo “& family” placed second on the gaming billionaire chart with a net worth of $11.7b, ranking #106 on the overall list. Ronald Perelman, who holds a major stake in Scientific Games Corporation, occupied the #211 spot with $6.9b, while Johann Graff, boss of Austrian gaming operator Novomatic AG, ranked #230 with a net worth of $6.5b.

PokerStars co-founder Mark Scheinberg was ranked #345 with a net worth of $4.9b, although Scheinberg’s involvement in the gaming industry essentially ended with the sale of The Rational Group to Amaya Gaming (now The Stars Group) in 2014. Playtech founder Teddy Sagi, whose involvement in the gaming industry has also diminished in recent years, ranked #383 with $4.5b.

Denise Coates, who heads up the UK’s leading online gambling business Bet365, was the top gambling female with a net worth of $4.5b, tied with Sagi at #383.

The rest of the gaming sector’s top-10 was led by NagaCorp founder Chen Lip Keong (#437, $4.1b), while MGM China investor Pansy Ho tied with Bloomberry Resorts boss Enrique Razon in spot #565 with $3.4b apiece.