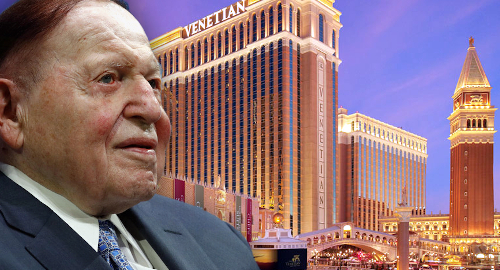 Las Vegas Sands chairman Sheldon Adelson is taking medical leave for cancer treatment, the second such break since his 2019 diagnosis of non-Hodgkin’s lymphoma.

On Thursday, Sands announced that Adelson would be taking a medical leave of absence as he resumes his cancer treatment. Sands president/COO Rob Goldstein has been named acting CEO/chairman of Sands and Sands China during the 87-year-old Adelson’s absence.

It’s unclear how long Adelson’s treatment will take. His cancer diagnosis became public knowledge in the spring of 2019 and Adelson didn’t return to active duty until October of that year. Adelson also suffers from peripheral neuropathy, a condition that often leaves him reliant on an electronic scooter to get around.

Investors initially took the news hard, pushing Sands’ share price down around 1.5% by mid-morning, but the shares have since rebounded and are currently sitting close to where they started the day. Deutsche Bank analysts issued a note suggesting Goldstein was “more than simply well equipped” to hold the fort until Adelson’s return.

Sands recently confirmed rumors that it was considering offers for its Las Vegas properties, which consist of the Venetian and Palazzo casinos and the Sands Expo Convention Center. The pandemic has done serious damage to Vegas casino fortunes and both Adelson and Goldstein have stated their view that the market won’t return to its former glories until the convention market rebounds.

The Vital Vegas blog recently reported that Hard Rock International (HRI) and MGM Resorts were among the companies mulling whether Sands’ expected asking price of $6b was worth it. MGM’s real estate investment trust previously expressed interest in expanding its Vegas Strip holdings while HRI struck a deal last spring to allow it to use the Hard Rock brand in Vegas should the right opportunity arise.

Meanwhile, Sands has confirmed its efforts to lobby Texas politicians on finally legalizing casino gambling, with Sands spokesman Andy Abboud saying last month that Texas was “the biggest plum” left to be picked in the increasingly saturated US casino market.

Abboud said Sands’ pitch to Texas lawmakers would take the angle that Sands building a major integrated resort would be like welcoming “Tesla or an Amazon facility,” with the resulting “tens of thousands of jobs and hundreds of millions of dollars in tax revenue and ancillary benefits of hotels and tourism.”

The Texas casino market currently consists of a couple small tribal venues and some dodgy casino cruise operations, and legislators have traditionally shown little interest in virtually any form of gambling expansion. Lt. Governor Dan Patrick, a social conservative with no love for gambling, will reportedly serve as either conduit or brake for any potential casino legislation.