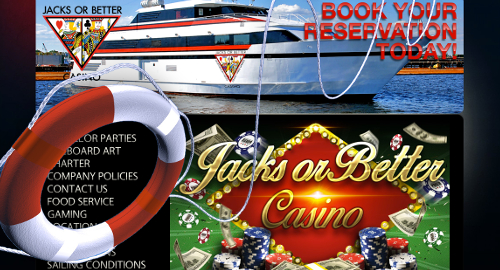 A new Texas-based casino cruise ship was forced to return to port after striking a buoy just one week after its maiden voyage.

Jacks or Better launched its casino cruise service out of the port of Galveston on April 7. The ship offers twice-daily, six-hour sailings four days a week to a point roughly nine miles offshore, where Texas’ restrictive gambling rules no longer apply, allowing guests to legally gamble on slots and table games and even bet on sports.

If you recognize the Jacks or Better name, the casino cruise used to operate out of Jacksonville, Florida, where it earned the ire of the National Football League for using photos of Jacksonville Jaguars players on a website promoting the gambling cruise. Company president Jack Slotkin ultimately lost his legal fight with the NFL over image rights.

This past Saturday, the floating casino was forced to return to port ahead of schedule after it struck a buoy shortly before midnight. The company issued a statement saying that the ship suffered only “minor cosmetic damage” and none of the 100 guests on board were injured. The ship’s operators say they’re working with the Coast Guard to avoid future incidents of this type.

The ship’s gaming options include roughly 200 slots, as well as a variety of tables offering baccarat, blackjack, craps, roulette, three-card poker as well as its proprietary Shootout Poker, which allows players to play both against each other and concurrently against the house.

The ship also features a “virtual sportsbook” that takes wagers on “any sporting event in the world, either current or future.” In keeping with the operators’ past willingness to thumb its nose at the NFL (and the NCAA), the sportsbook also boasts that “naturally, all professional and collegiate sports are on the menu.”

The company’s website notes that “events that don’t end before the cruise is over are paid the next day.” It’s unclear whether the ship requires winning punters to partake in another trip offshore in order to collect their previous day’s winnings or whether it’s willing to settle up dockside.

The former option would give the sportsbook and/or the casino the chance to win its money back, while the latter option could theoretically leave the company looking like the back-of-the-bar bookie, whose activities are most decidedly frowned upon by US law enforcement.

However, the Florida operation also operated a sportsbook, and the company somehow managed to avoid prosecution during its time in the Sunshine State, so presumably its legal team has worked out the precise dance moves it needs to make in order to stay on the right side of the law. Now if it could only avoid floating hazards…