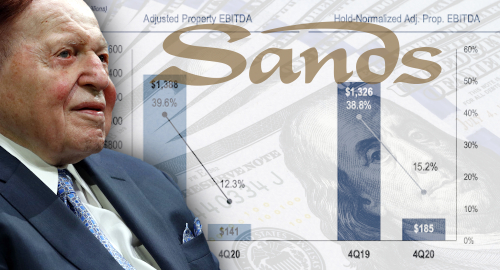 Casino operator Las Vegas Sands lost its founder earlier this month and lost another $376m in the final quarter of 2020.

With rare exception, Sands’ Macau casinos saw larger percentage drops in their VIP table game turnover than those suffered by mass market tables, and Q4’s VIP win rate was 1.72%, less than half the rate in Q4 2019 and well below the expected range of 3.15%-3.45%.

Macau operations were further limited by the remodeling of Sands Cotai Central into The Londoner Macao, which saw the complete cessation of VIP gambling at the property during Q4. But even the property’s mass tables took an ungodly hit, with drop down 82.4% year-on-year.

Singapore’s situation was only slightly better, with VIP turnover down 84% and VIP win dropping nearly a full point year-on-year. Mass table drop was off 55%, although slots handle slipped only 4.2%, resulting in greater slots spending than both VIP and mass tables combined, while slots win hit $149m, 50% better than mass table revenue.

MBS reported earnings of $144m in Q4, more than twice the sum earned in Q3 2020. Sands China also swung into positive territory with earnings of $47m versus a $233m loss in Q3. Only Vegas played contrarian, increasing its sequential earnings loss by $10m to $50m.

Vegas was laid low by a combination of decreased slots handle and table drop, while the table win rate was barely half that of Q4 2019. Sands claims Vegas is seeing improvements in its weekend occupancy and slots play, although weekday metrics remain challenging.

Sands shares closed Wednesday down nearly 6.5% from the day before, although most of its rivals suffered similar or greater declines on the day.

THE CALL
This marked the first earnings call for Sands’ new management team since the death of founder/CEO/chairman Sheldon Adelson earlier this month, meaning we’ll never hear his signature catchphrase ‘yay, dividends’ again. That said, Adelson (pictured) had little opportunity to use the phrase in his final year of running the company, which faced unprecedented impacts due to the pandemic.

Sands’ new chairman/CEO Rob Goldstein largely played his cards close to his chest, avoiding specifics on a number of pressing issues facing the company, including the upcoming concession renewals for Macau casino operators and the future of the company’s Las Vegas properties.

Goldstein insisted that Vegas had “plenty of gas left in the tank,” and while hotel and convention bookings for 2021 remain troublingly low, the outlook for 2022-2027 is “unbelievable” and Sands remains “very bullish” on the market’s long-term future.

Regarding possible expansion into New York and Texas, Goldstein said Sands was “definitely in the hunt” for a Big Apple casino, although the state has yet to approve any plans. Sands is also “kicking the tires” in Texas, and Goldstein confirmed that he’d visited the Lone Star State just last week but had nothing concrete to announce.

ONLINE GAMBLING A LEARNING PROCESS
Goldstein was at Adelson’s right hand for years but it remains unclear whether Goldstein shared Adelson’s legendary antipathy towards online gambling. A few days before Adelson’s passing, word spread that Sands was discussing possible tie-ups with sports betting operators, which conceivably opened Sands to the possibility of online gambling.

On Wednesday, Goldstein said he had “very strong thoughts” about “digital” gambling but didn’t want to discuss them at present. Goldstein said “digital is in the multitude of considerations” on Sands’ radar and the company is “learning, observing and talking to people but we are nowhere near a decision on that.”

Goldstein added that Adelson never doubted online gambling’s ability to make a buck; his antipathy was born of “ethical” considerations, namely, how to ensure that operators have the capacity to prevent children and vulnerable adults from accessing the products.