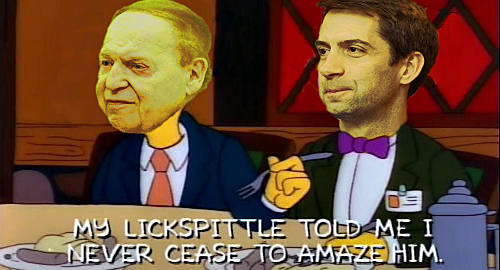 Online gambling expansion in US states is once again under threat after one of Sheldon Adelson’s Congressional lapdogs filed new legislation aimed at scaring banks into cutting their ties with gambling operators.

Last week, Sen. Tom Cotton (R-AR) filed S.3322, the Prevention of Deceptive or Child-Targeted Advertising in Violation of the Unlawful Internet Gambling Enforcement Act (the UIGEA being the 2006 legislation that barred US financial institutions from processing payments on behalf of gambling operators the US doesn’t like).

The bill’s stated intent is to “prevent the unlawful use of financial instruments … for online slot machines, lotteries, table games, and similar offerings, including games and applications that are deceptively marketed or designed to be attractive to children, and for other purposes.”

The bill would require the Treasury Department to produce a report on games “offered by online casino and lotteries operating in the United States” that feature allegedly kid-friendly content. The report would also have to detail how these sites process transactions with their customers and whether current mechanisms to uphold UIGEA’s edicts can be strengthened.

The Federal Trade Commission would be required to do its own report on how to prevent online operators marketing their insidious kiddie-crack, including details of how ads are displayed within apps and games. The FTC must also report on efforts by operators to “deceptively present” gambling products “as part of non-gambling gameplay or application use within websites and mobile apps” offered to US consumers.

The use of cartoon characters as a ‘think of the children’ gambit has found favor across the pond, where the UK Gambling Commission and Advertising Standards Authority routinely spank operators for accidentally exposing kids to gambling promos featuring animated characters that evidently appeal to children of all ages.

Cotton has been down this road before, having introduced a bill in 2016 that sought to undo the 2011 Department of Justice opinion on the scope of the Wire Act that led to the current crop of states that have legalized online gambling and/or online lotteries.

That bill, which was introduced just days after Adelson cut a Senate super PAC a $20m check, became somewhat moot after the current DOJ leadership issued a fresh opinion in 2018 that said exactly what Cotton’s bill was trying to achieve.

That 2018 opinion was widely viewed as a thank you to Adelson for his GOP campaign contributions and is currently the subject of a federal lawsuit after courts found that the DOJ’s current arguments “do not withstand scrutiny.” One could likely say the same for Cotton’s latest Adelson overture, which will likely follow his 2016 bill into history’s dustbin, but not before Cotton — whose own seat will be contested this November — scores the GOP some more Adelbucks in an election year.