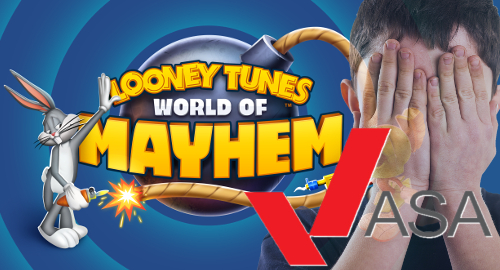 Four UK online gambling operators have been taken to the regulatory woodshed after their product promos appeared in a Looney Tunes game app.

All of the ads appeared within the app thanks to the four firms’ relationships with Tapjoy Inc, a San Francisco-based affiliate marketing firm. Tapjoy blamed the cockup on the Looney Tunes app maker having mistakenly set the app’s maturity setting to ‘mature-gambling’ and Tapjoy said it immediately corrected the error once it learned of the issue.

App publisher Scopely Inc blamed Tapjoy for the inadvertent ad placement and claimed to have ordered Tapjoy to pull the ads the moment Scopely became aware of it. However, while Scopely said individuals under 16 years old weren’t permitted to play the game, players weren’t required to register before using the app. Scopely further claimed that research revealed that the app appealed to ‘a more general audience.’

The ASA acknowledged that plenty of old farts were well familiar with Bugs Bunny et al but noted that cartoon characters were also likely to appeal to people not old enough to vote. The ASA further noted that the four gaming firms had neglected to make use of Tapjoy’s additional customer targeting options, such as using interest-based data inferred from players’ gaming preferences and self-reported demographic details.

Three of the gaming firms have since terminated their relationships with Tapjoy, while Hills appears to be more willing to give Tapjoy the benefit of the doubt. Regardless, the ASA warned all four operators to ensure their ads were “appropriately targeted in future.”

While recent research has shown that kids are exposed to fewer gambling ads than they were just five years ago, the UK’s watchdogs have made it clear that there’s plenty more work to do. In April, the ASA pointed its finger of scorn at five online gambling operators it found were allowing kids to view gambling promos via YouTube and other kid-friendly sites.