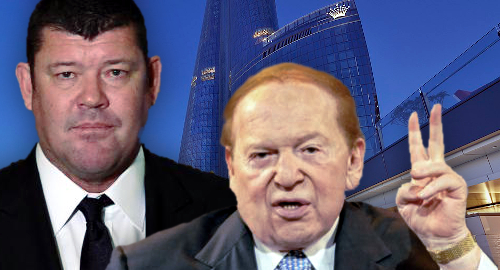 Crown’s shares rose nearly 3% on Monday to close at AU$9.90, a peak the Aussie operator hasn’t hit since mid-2020, right around the time that its regulatory problems truly began in earnest. However, the company spent a good part of the weekend denying the media reports that contributed to this surge.

On January 2, the Sydney Morning Herald reported that Packer’s $200m yacht – in which the mogul has spent the bulk of the year hiding from COVID-19 on the high seas – spent the final days of 2020 parked alongside another superyacht owned by none other than Sheldon Adelson, chairman and controlling shareholder of Las Vegas Sands.

The paper noted that there’d been “tenders between both vessels going back and forth,” sparking speculation that Adelson was discussing the sale of Packer’s nearly 37% stake in Crown. However, a Packer flack dismissed talk that the two casino titans had any contact during their boats’ extended proximity.

The idea of such discussions isn’t so daft, given that it was only last May that Sands was reportedly kicking Crown’s tires, and that Sands recently confirmed it’s considering unloading its US properties in Las Vegas (where Packer unsuccessfully tried to establish a Crown presence). As such, there may not necessarily be any fire here, but things are getting smoky as hell.

Then there’s Packer’s disastrous video testimony at the New South Wales inquiry into a litany of compliance failures at Crown Melbourne. Speculation immediately mounted that Packer will need to reduce his holdings to preserve Crown’s NSW future.

And that NSW future currently looks pretty bleak. The flashy new Crown Sydney venue opened in late-December, but NSW regulators declined to approve any gambling operations at the property pending the inquiry’s final report (due in February). And with Australia and China currently feuding, Crown Sydney’s capacity to attract Chinese VIP gamblers appears extremely limited for the foreseeable future.

Crown’s future in Victoria is almost as uncertain after state regulators announced they were advancing a scheduled license review for Crown Melbourne by two years. The property is among the state’s biggest employers, so while the state isn’t likely to shut the casino down, it could put pressure on Crown to cede ownership and management to some fresh (albeit very wrinkly) faces.