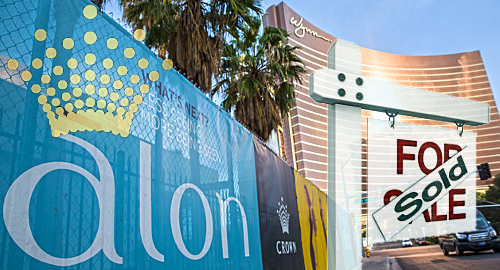 On Thursday, Crown announced that it had agreed to sell its interest in a 34.6-acre piece of vacant real estate on Las Vegas Boulevard to US casino operator Wynn Resorts for US$300m. After accounting for minority interests, Crown said its share of the proceeds will come to roughly $264m.

The land in question is directly across the Las Vegas Strip from Wynn Las Vegas, and Wynn has reached a separate deal to buy an additional four acres of land adjacent to the Crown land. The additional purchase brings Wynn’s total outlay to $336m.

Wynn described its enlarged Vegas footprint as “a unique assembly of contiguous real estate of approximately 280 acres.” Wynn isn’t saying much regarding its plans for this space, saying only that whatever emerges will “further change tourist visitation patterns in Las Vegas drawing more visitors to the north end of Las Vegas Blvd.”

Crown originally planned to build a massive integrated resort called Alon on the Vegas land, but these plans were forged before China abruptly stopped exporting VIP gambling whales a few years back, and Crown soon found itself unable to raise the necessary capital to make the $2b project fly.

Fast forward to this year and Crown announced plans to sell the Alon land, part of a broader divestiture of its international projects in order to focus on its struggling domestic resorts. The biggest of these divestments was the sale of Crown’s share of the Melco Crown Entertainment (now Melco Resorts & Entertainment) joint venture in Macau and the Philippines.

Crown also announced Thursday that it intends to sell 4.2m shares it holds in Caesars Entertainment Corporation, from which it expects to raise around US$54m. Crown will get a further A$62.5m from the sale of its stake in the Ellerston rural resort at which it entertains visiting VIPs.

Still not done with the deal-making, Crown said it’s “in discussions with the CrownBet management, led by Matthew Tripp” regarding the previously announced plans to sell Crown’s 62% stake in the online sports betting operation. Along with loans advanced by Crown to CrownBet, Crown said it hopes to realize A$150m from the sale.

Finally, Crown says it reached a A$60m deal to sell two mid-level floors of the in-development Crown Sydney Hotel Resort to Crown’s majority shareholder James Packer. Because sometimes one floor just isn’t enough space to hide from the world and contemplate where it all went wrong.