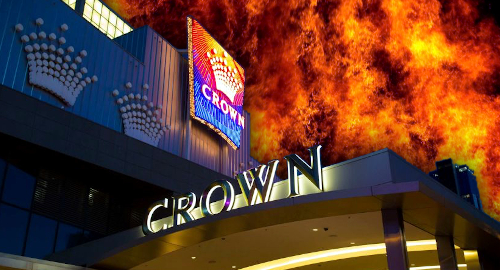 Australian casino operator Crown Resorts has apparently reached the ‘bargaining’ stage of the five stages of grief over the delayed opening of its new Crown Sydney property.

Late Wednesday, Crown issued a statement acknowledging the decision earlier that day by the New South Wales Independent Liquor & Gaming Authority (ILGA) to pause approval of the gaming license for Crown Sydney, which the company hoped to open in mid-December.

Crown said it would focus on opening Crown Sydney’s non-gaming operations ‘in consultation with the ILGA.” Crown subsequently unveiled a management plan for the public Sky Deck on Crown Sydney’s 66th floor, which Crown hopes to open in March.

But in the shorter term, Crown is pressing the ILGA to permit gaming at Crown Sydney under the supervision of ILGA inspectors. Crown also pledged to honor strict anti-money laundering (AML) rules, restructure the company’s management and submit daily activity reports to the ILGA as part of this “working test.”

It appears doubtful that the ILGA will accept Crown’s proposal, given that the ILGA sat through weeks of truly cringeworthy testimony by Crown’s senior management and board members regarding their apparent disinterest (until now) in complying with AML protocols and the laws of other countries, particularly China.

The final straw appeared to come Tuesday night around 11pm, when Crown lawyers belatedly filed a report that the company had commissioned regarding suspected money laundering through two company-controlled financial accounts. These accounts were set up to enable Crown to facilitate money transfers between its international VIP gambling customers and its casinos.

The bank accounts repeatedly came up for discussion during the inquiry, but Crown execs repeatedly denied any knowledge of potential money laundering activity. As it turns out, the report concluded that it was “more likely than not” that the accounts had facilitated shady cash transfers

On Wednesday, ILGA commissioner Patricia Bergin chastised Crown’s attorneys for wasting the inquiry’s time and taxpayers’ money by not submitting the report earlier. ILGA chair Philip Crawford later stated that Crown didn’t appear to be “picking up the vibe” of the inquiry, which could ultimately recommend that Crown is unsuitable to hold an NSW gaming license when the inquiry delivers its final report in February 2021.

Such a finding in NSW would not only doom Crown Sydney to white elephant status, it could force regulators in Victoria and Western Australia to revoke the licenses of (respectively) Crown Melbourne and Crown Perth. Regardless, Crown’s admission that money laundering likely occurred at those two casinos will put even more pressure on state regulators.

On Wednesday, Victorian Premier Daniel Andrews said he wasn’t yet prepared to revoke Crown Melbourne’s license, apparently content to wait for Crown’s response to the ‘show cause’ order issued by the Victorian Commission for Gambling and Liquor Regulation (VCGLR) last month.

While Andrews denied that the VCGLR was “waiting for others to do their job for them,” he hinted that Victoria’s government would carefully study the ILGA’s final report when considering how to respond. Andrews added that there was “a sacred trust when it comes to [gaming] licenses, and they need to be complied with.”