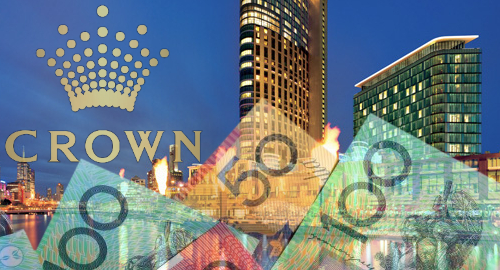 Try as they might, Australian casino operator Crown Resorts just can’t seem to buy a break from the tsunami of negative press that shows no sign of letting up.

Crown’s share price closed out Monday’s trading down nearly 3% to A$11.70, down more than a dollar from the price they were trading at before last month’s 60 Minutes exposé into alleged shady dealings involving Crown’s VIP gambling business.

On Monday, The Age newspaper – which collaborated with 60 Minutes and the Sydney Morning Herald in the Crown probe – reported that federal investigators were now probing two companies set up by Crown and overseen by Crown execs for possibly enabling drug traffickers to launder the proceeds of their criminal activity.

The two companies, Southbank Investments and Riverbank Investments, were used by Crown to receive and transfer funds to and from customers of Crown’s Melbourne and Perth casinos between 2012 and 2016. The money deposited into these accounts allegedly came from Crown’s junket partners to settle debts incurred by Crown’s VIP gamblers.

The Age quoted unidentified federal investigators claiming that suspected or convicted drug traffickers and money launderers had deposited money into the two Crown companies’ accounts. The Age clarified that there’s no evidence that any of the Crown execs overseeing the two companies were aware that criminals might be depositing funny money into the accounts.

In 2013, HSBC closed the two companies’ bank accounts as part of a purge of suspect accounts following the bank’s spanking by US regulators for laundering billions of dollars for Mexican drug cartels. The two Crown-linked companies subsequently opened new accounts with the Commonwealth Bank of Australia.

Crown took out full-page newspaper ads last week pushing back against the media reporting, which it called a “deceitful campaign” based on “unsubstantiated allegations, exaggerations, unsupported connections and outright falsehoods.” Despite this pushback, the company is currently the subject of multiple probes by various branches of federal and state government, as well as gaming regulators.

SUNCITY JUNKET BOSS DENIES AUSTRALIAN PROBE
Meanwhile, Alvin Chau, head of the Suncity Group junket, has publicly denied that he’s the subject of an Australian law enforcement probe. The publicly traded Suncity Group Holdings, a casino and hospitality firm with no direct junket operations, stated that the company had no business operations in Australia.

Chau, who controls both Suncity entities, went on to state that he “had no intention to go to Australia for the forthcoming twelve months and he is not aware of the said investigation of such Australian casinos. Mr. Chau further clarifies that he is not subject to any Australian investigation as at the date of this announcement.”

Suncity Group does run a VIP room at Crown Melbourne and another at The Star Entertainment Group’s eponymous flagship casino in Sydney. Neither Suncity Group nor Chau have been directly linked to Crown’s current woes, but The Age claimed last week that Chau had been barred from entering Australia.

NBA STAR ALLEGES RACIAL PROFILING AT CROWN MELBOURNE
Finally, Ben Simmons, Philadelphia 76er and Australia’s highest paid athlete, posted a video to his Instagram account this weekend in which he appeared to claim that he and several of his friends were denied entry to Crown Melbourne due to the color of their skin while the one Caucasian member of their group was allowed in.

The video, which has since been deleted, features Simmons standing at the entrance to the casino floor, with security staff standing in the background. Simmons said he found it “crazy that the only guy who doesn’t get checked to go into the casino is this guy,” indicating his white friend.

Simmons then points out the other members of his crew, all of whom he said had been denied entry by security, after which the white friend chimes in: “Not me!” Simmons closes the video by saying “Wow, we got a long way to go,” clearly intimating that the Crown staff had engaged in racial profiling in deciding who was allowed to enter the casino floor.

However, at least one social media viewer pointed out that Simmons was wearing camouflage pants, which are among Crown’s list of forbidden style choices on their property. That said, it’s unclear what (if any) sartorial sins the other members of Simmons’ party might have committed.