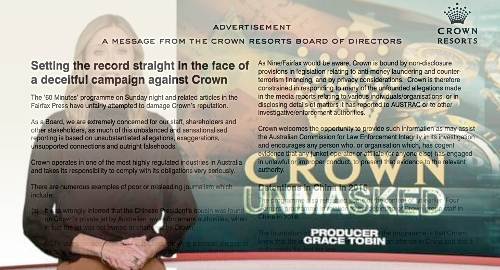 On Wednesday, Crown’s board of directors published ads in local newspapers aimed at “setting the record straight in the face of a deceitful campaign” by the 60 Minutes TV program and Fairfax Press. The company claims that these media outlets have “unfairly attempted to damage Crown’s reputation” through “unbalanced and sensationalized reporting.”

Last weekend, Aussie newspapers began teasing details from that Sunday’s episode of 60 Minutes, including claims that Crown broke Chinese law by promoting gambling to mainland VIPs, had relationships with junket operators linked to Hong Kong triads and had a sweetheart deal with Aussie officials to fast-track short-term visa applications for its Chinese VIPs.

As for claims that Crown casinos facilitate money laundering, Crown hedged a bit, saying it welcomed the opportunity to demonstrate its adherence to anti-money laundering (AML) protocols to government agencies but that legislation “constrained” Crown’s ability to publicly share details of its compliance.

Crown also cast shade on some of the ex-staffers whose allegations featured prominently in the 60 Minutes episode, noting that the program failed to mention whether these ex-staffers were paid for their appearance.

Crown questioned the “objectivity” of one of these former employees, who was among the Crown staffers detained by Chinese authorities in 2016, noting that she “made an unsuccessful demand for compensation from Crown of over 50 times her annual salary.”

The Sydney Morning Herald and The Age newspapers that contributed to the Crown exposé declined to run Crown’s advert, but did publish a point-by-point rebuttal of Crown’s statement. For one thing, the papers claim they submitted “63 detailed questions” to Crown regarding the allegations but received only a ‘no comment’ reply.

The papers also stated that Crown ex-staffer Jenny Jiang neither sought nor received any payment for her 60 Minutes interview.

Crown’s Wednesday statement said it hadn’t “sought to circumvent visa requirements or compromise any process of identification or verification” of its international VIP gamblers. The revelation of a fast-track visa arrangement with the Department of Home Affairs dating back to 2003 prompted Australia’s attorney general to announce Tuesday that he’d referred the brouhaha to the Australian Commission for Law Enforcement Integrity (ACLEI), a federal corruption watchdog.

Crown issued a separate statement Wednesday in response to a July 30 query by the Australian Stock Exchange (ASX) as to whether the company had been hiding details of its alleged failings from investors. Crown’s shares have lost about 6.3% of their value since Friday’s close.

Crown stated that it was “not aware of any information concerning it that has not been announced to the ASX which a reasonable person would expect to have a material effect on the price of value of [Crown’s] shares.”

In May, Crown’s founder and single largest shareholder James Packer sold one-fifth of the company’s shares to Melco Resorts & Entertainment (MRE). That deal is still awaiting approval from Australian gaming regulators, but they might not prove the only obstacle to the deal going forward.

On Wednesday, GGRAsia reported that the gambling regulator in Macau, where MRE holds a gaming license, “continues to pay attention” to the unfolding Crown drama and would “follow up the matter” if it determined that the details were “related to Macau’s gaming industry.”