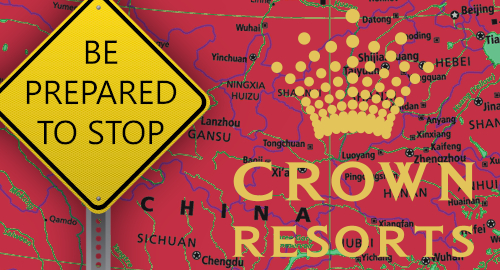 The probe into Crown’s activity by the New South Wales Independent Liquor & Gaming Authority (ILGA) heard testimony this week from Jason O’Connor, Crown’s former international VIP services chief, who spent months in a Chinese prison after he and 18 other staffers were arrested in 2016 for promoting gambling to mainland residents.

On Wednesday, O’Connor told the inquiry that he received an email from a staffer in March 2014 relaying concerns from a Mr. Xu, one of Crown’s Chinese VIP gambling customers, that Chinese authorities were preparing to arrest Crown’s staff for recruiting Chinese citizens to gamble abroad at Crown’s Australian casinos.

China allows integrated resort operators to promote their non-gaming amenities to mainland residents but any mention of gambling is strictly forbidden. Crown’s direct dealings with Chinese VIP gamblers were no secret, and even Crown’s former joint venture partner thought the company was playing with fire.

O’Connor told the inquiry that warnings “of a similar nature” to those offered by Xu were received “from time to time” but O’Connor said he found it difficult to ask his Crown superiors to “temper their expectations” regarding Chinese VIP revenue. The boost these high-rollers provided to Crown’s bottom line “may have blinkered” senior management as to the risks of continuing down this path.

O’Connor was shown text messages he exchanged in 2013 with another senior Crown exec regarding illegal “side betting” going on between a VIP gambler and a junket operator in a Crown VIP room. O’Connor told the inquiry that such an arrangement not only cheated the casino out of revenue but also deprived the government of tax revenue.

On Wednesday, the inquiry heard from Crown’s legal eagle Joshua Preston, who acknowledged that the company’s former ties to a certain junket had struck the fear of God into some Crown staff. The “unsavory characters” associated with Ng Chi Un’s ‘Hot Pot’ junket left some staff “concerned about some harassment” if “a check was going to be banked and it bounced.”

When ILGA Commissioner Patricia Bergin asked Preston if those concerns extended to “threats of violence” against staff, Preston didn’t deny it. Preston added that Crown stopped working with the Hot Pot crew in 2015.

Bergin queried Preston further regarding Hot Pot’s Mr. Ng, who was referred to in a 2015 email by another Crown staffer as having ties to an “underground network.” Preston said he didn’t know what the staffer meant by that.

Bergin suggested this was a reference to organized crime, adding that Crown’s board should have been aware of Mr. Ng’s alleged connections when it issued a public statement in 2019 refuting media reports regarding Crown’s alleged dealings with underworld figures.

The NSW inquiry is attempting to determine Crown’s suitability to operate gaming in the state. Crown is currently putting the finishing touches on its Crown Sydney project, which is expected to conduct a soft launch this December.