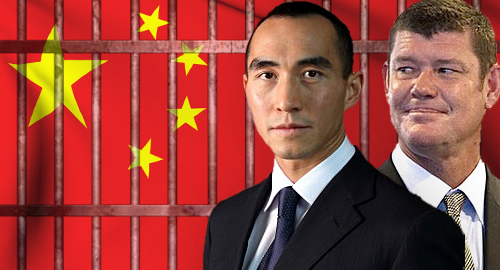 In an interview with the Financial Times published late Tuesday, the Melco Resorts & Entertainment CEO said the 18 Crown staffers arrested last October and the South Korean casino representatives detained in 2015 had failed to be “discreet” in their dealings with mainland Chinese gamblers.

Chinese law prohibits gambling operators from promoting gambling activity on the mainland but Ho said the Crown staffers and the South Koreans had been “running around offering credit, talking about collection.” Ho said the reaction of the Chinese authorities was “like what the hell, you’re deliberately spitting on our faces.”

A spokesman later said that Ho wasn’t “singling out Crown” with his comments, only making “general comments on the industry overall,” but Ho isn’t the first industry figure to criticize Crown’s promotional activities.

A month after the arrests, a junket investor said Crown had been “too aggressive” in its efforts to cut out the junket middlemen and deal directly with Chinese VIPs, in a bid to increase the profit margins from VIP gambling at Crown’s Australian casinos.

Earlier this month, Australian media reported that the case file for the 14 Crown staffers and two former staff members who are still in Chinese prison had been handed to a Shanghai prosecutor. The hope is that the accused will be charged with promoting illegal gambling activity rather than money laundering, and that they will be sentenced to time served, as was the case with the detained South Koreans.

Shortly after the arrests, Packer began the process of selling off his entire holdings in the Melco Crown Entertainment joint venture, which subsequently rebranded to remove the legacy Crown name. Ho told the FT that he and Packer “are still great friends,” but Ho wanted to “double up” on gaming investments in China and the rest of the world while Packer chose to focus on Crown’s domestic resorts.