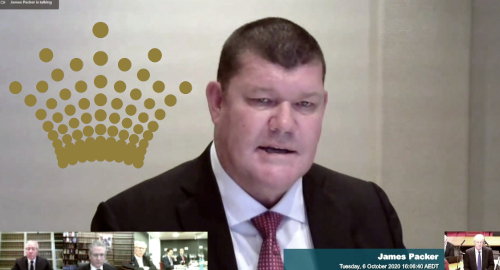 Australian casino operator Crown Resorts’ reputation took further hits on Tuesday as its largest shareholder James Packer blamed a medical condition for threats he made to an unidentified businessman.

Tuesday’s testimony centered on Packer’s failed 2015 effort to take Crown private and discussions he had with an unidentified private equity group that Packer wanted to put up AU$1.5b toward acquiring the Crown shares he didn’t already own. The hedge fund reportedly offered only AU$400m subject to due diligence.

The bulk of the discussion regarding Packer’s communications with a representative of the hedge fund were conducted away from the cameras. When the public testimony resumed, ILGA Commissioner Patricia Bergin asked Packer whether the nature of his communications was “totally unacceptable for a director of a licensee of a casino,” to which Packer replied in the affirmative.

Packer also agreed that he’d “verbally” made threats against the hedge fund representative but claimed to be surprised that these comments left the representative feeling afraid. Packer agreed that his comments were “shameful” and “disgraceful” and said he’d “clearly forgotten” his obligation not to bring discredit on Crown.

Packer resigned from Crown’s board not long after the exchange with the hedge fund rep, which followed a turbulent period that saw Packer brawling in the street with a long-time acquaintance. Packer later resumed his board seat only to quit again in 2018, citing a need to focus on his mental health issues.

Packer said Tuesday that he was “being treated for my bipolar,” the first time he has publicly indicated that he suffers from the disorder. Packer said his 2015 resignation made no mention of his condition due to his hope that the information “would stay private.” Packer also said he was taking “strong medications” that impaired his ability to recall past events with sufficient clarity.

Packer’s testimony will continue on Wednesday, when he will surely be questioned regarding Crown’s sketchy commitments to anti-money laundering protocols at its VIP gaming rooms. The company recently halted all junket-based VIP activity at its casinos while it attempts to boost its compliance commitments.

Crown’s AU$2.4b Sydney casino could face a grim future if the ILGA deemed the company to be unsuitable to hold an NSW gaming license. However, most analysts expect the property will receive its license, albeit saddled with extra restrictions to ensure future compliance.