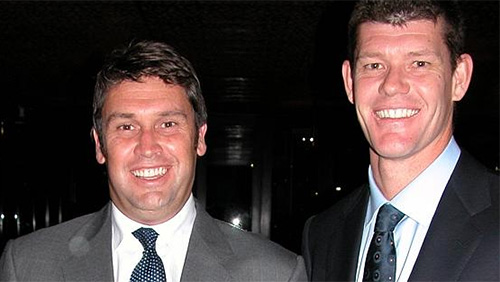 The Floyd Mayweather – Marcos Maidana fight was all sorts of awesome, but believe it or not, that wasn’t even the best fight of the weekend. That distinction belongs to two middle-aged men halfway around the world, specifically Australian casino tycoon James Packer and Nine Network’s chief executive, David Gyngell.

It didn’t have the pageantry of the prizefight in Las Vegas, but numerous reports indicate that Packer and Gyngell had more than just a dust up at the former’s apartment in Bondi. The two actually engaged in full-on fisticuffs, mixed in with some wrestling, hair-pulling, and (eventually) teeth-searching.

Photos of the fight have since become the subject of a newspaper bidding war with News Corporation reportedly outbidding the rest at a price north of $200,000. Those who have seen the photos report a fight that pretty much had every conceivable element short of gloves, a referee and an actual ring.

According to the Brisbane Times, Gyngell was seen outside Packer’s house early on Sunday afternoon, waiting for the casino mogul to arrive home. Once the casino mogul arrived, the two didn’t even wait to get warmed up, unleashing profanities at one another before “Bedlam at Bondi” happened. Amid reports of headlocks, shirt-tearing, wrestling and fists flying, Packer reportedly secured a full mount on Gyngell and proceeded to lock his head in a vice-grip with Gyngell’s bare feet flailing in the air.

Eventually, the brawl was brought to an end after Packer’s bodyguards separated the two with one reportedly grabbing Packer’s mouth to try and pull him away from Gyngell.

The two are actually long-time friends and seeing them engaged in the kind of violence makes you wonder what exactly caused the melee. The Guardian’s sources at Nine Network reported that Packer saw a live satellite van belonging to the Nine news crew parked outside his house and mistakenly believed that it was there to disturb him. He then called Gyngell to complain about the van, at which point Gyngell investigated and assured his buddy that the van was left by a cameraman who actually lived on the same street. Gyngell even waited for Packer to explain the situation but fists started flying the moment Packer arrived.

As for who got the best of the fight, both men suffered nothing more than scrapes, bruises, and possibly some lost teeth. Packer reportedly sported a black eye while Gyngell was seen leaving the scene with shoulders hunched, a clear sign that he was grasping for air.

The two have since issued a joint statement, essentially brushing off the fight as a blip on an otherwise solid friendship. Most importantly, they claim to still be buddies, dousing any hope of a rematch in the near future.