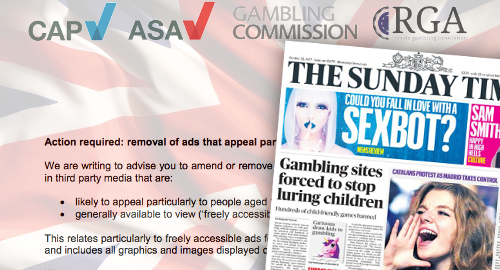 UK-licensed online gambling operators have been told to purge their websites of any marketing material including content that might hold particular appeal to under-18s, even if the content doesn’t involve real-money play.

The letter advises operators to “amend or remove immediately any ads” from their websites or third-party media that are “likely to appeal particularly to people aged 17 or younger” and are “generally available to view (freely accessible).” The advice applies particularly to “freely accessible ads for play-for-free and play-for-money games and includes all graphics and images displayed on a website or in third party media.”

The letter claims the agencies were prompted to act by recent UK media reports, in particular a lengthy article in the Sunday Times, regarding online slots titles with themes including Peter Pan, Jack and the Beanstalk and other ‘kid-friendly’ characters.

The UK’s CAP Code clearly states that gambling marketing “must be socially responsible, with particular regard to the need to protect children, young persons and other vulnerable persons from being harmed or exploited.”

The CAP Code holds a dim view of ads that are “likely to appeal more to under-18s than to over-18s.” The Code claims that the use “particular colors, cartoon and comic book images, animals, child- and youth-orientated references” as well as the aforementioned kid-friendly characters are “likely, alone or in combination, to enhance appeal to under 18s.”

The letter acknowledged that operators may be forced to make “difficult and nuanced decisions” regarding the use of imagery and characters “which might have appeal to both children and adults.” The letter cites a 2015 ASA ruling that rejected a complaint filed by a TV viewer who felt a Foxy Bingo ad’s use of its fox character was intended to appeal to children.

Operators who are uncertain about the acceptability of specific ads are urged to contact the CAP’s Copy Advice Team for guidance. Ultimately, if operators choose to retain questionable adverts, they run the risk of being sanctioned by the CAP Compliance team and, of course, the UKGC.

The UK anti-gambling media were taking victory laps this weekend, celebrating their having brought the infamous child-predating gambling industry down a notch. But while the Times and the Daily Mail are claiming the letter ordered the removal of all kid-friendly games, the agencies’ letter refers only to marketing material. In fact, the letter used bold type on the word ‘ads’ when referencing the scope of its advice. It remains to be seen how operators interpret the letter’s scope.

Of course, left unexplained in all this hoopla is quite why gambling sites that have effective age-verifying practices – i.e., all UKGC licensees – would bother devoting marketing resources to attract child gamblers when children can’t open accounts and gamble. But hey, if urban myths are all the rage, there’s still time to publish scary articles regarding poisoned Halloween candy.