US DOJ reverses its 2011 opinion on scope of Wire Act 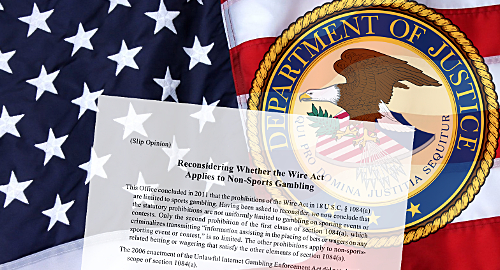 The US Department of Justice has reversed its previous opinion that the Wire Act applied only to sports betting, setting up a showdown with the states that have launched intrastate online gambling markets.

In December 2011, the DOJ’s Office of Legal Counsel (OLC) issued an opinion that interpreted the 1961 Wire Act as only applying to online sports betting. This opinion paved the way for multiple US states to launch intrastate online lottery, casino and poker operations within their borders.

Both the 2011 and 2018 opinions hinge on what is essentially a question of grammar, specifically, the absence of a comma in the section that prohibits “the transmission in interstate or foreign commerce of bets or wagers or information assisting in the placing of bets or wagers on any sporting event or contest.”

The following clauses prohibit “the transmission of a wire communication which entitles the recipient to receive money or credit as a result of bets or wagers, or for information assisting in the placing of bets or wagers,” but make no mention of sporting events or contests.

The 2011 opinion concluded the text was ambiguous, and found it logical to assume that all the clauses were sports-related. The 2018 opinion believes there is no ambiguity in the language and that the 2011 opinion “incorrectly interpreted the limitation.”

UIGEA CARVEOUTS NEED NOT APPLY
The 2018 opinion also finds that nothing in the 2006 Unlawful Internet Gambling Enforcement Act (UIGEA) – which barred financial institutions from processing payments for online gambling companies – modifies the scope of the Wire Act.

The UIGEA contained a few carveouts for certain gambling activities, including those in which state-approved bets or wagers are “initiated and received or otherwise made exclusively within a single State.” But the 2018 opinion notes that the UIGEA also contains language clarifying that none of its carveouts alter or limit the existing prohibitions under the Wire Act.

DON’T TAKE THE LAW INTO YOUR OWN HANDS, TAKE ‘EM TO COURT
The 2018 opinion acknowledges that overturning legal precedents is a serious matter, and thus “reaching a contrary conclusion from our prior opinion will also make it more likely that the Executive Branch’s view of the law will be tested in the courts.”

Assuming the DOJ finds itself defending its new position in court, it will have to overcome the fact that previous federal cases, some involving major credit card issuers, have held that the Wire Act only applies to sports betting.

The 2018 opinion notes that some states relied on the 2011 opinion to launch online lottery and gambling operations, but the OLC doesn’t believe “that such reliance interests are sufficient to justify continued adherence to the 2011 opinion.”

WHO TAKES THE HIT?
There are currently three US states that have launched intrastate online gambling operations, while Pennsylvania is/was in the process of launching its market this year, and six US states have launched online lottery sales.

It’s unclear how much these operations will be impacted by the new ruling, given their inherently intrastate nature, although major financial institutions could once again become wary of processing transactions for any domestic online gambling operators. The online poker liquidity sharing pact between Delaware, Nevada and New Jersey is clearly an interstate matter, as are the national operations of daily fantasy sports operators such as DraftKings and FanDuel.

The 2018 opinion further notes that Congress “retains ultimate authority over the scope of the statute and may amend the statute at any time, either to broaden or narrow its prohibitions.” The new DOJ worldview may provide the justification for some pols to propose enlarging the scope of the federal sports betting bill filed just before Christmas.

ADELSON CELEBRATES
President Donald Trump’s DOJ has long made clear its interest in ‘revisiting’ the 2011 OLC opinion, which many observers viewed as a backscratching payoff to Las Vegas Sands boss Sheldon Adelson, a major GOP sugar-daddy and a bitter foe of all things online gambling.

Sure enough, Adelson’s Coalition to Stop Internet Gambling (CSIG) immediately issued a press release expressing its pleasure with the new DOJ opinion, calling the 2011 opinion “as problematic legally as it was morally” while calling the new opinion “a win for parents, children and other vulnerable populations.”

Bottom line, the US online gambling market now resembles an anthill that some child bully has just kicked to pieces. However this shakes out, lawyers across the country are licking their lips at the prospect of all those extra billing hours.