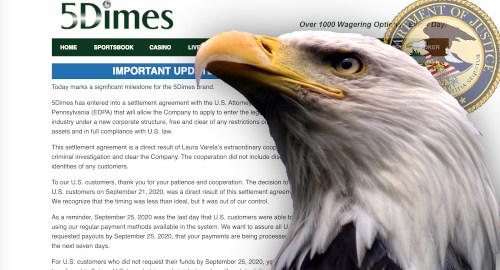 Former US-facing online sportsbook 5Dimes has reached a financial settlement with the US Department of Justice ahead of a plan to pursue sports betting licenses in the regulated US market.

On Wednesday, the US Attorney for the Eastern District of Pennsylvania announced that it had reached a settlement with 5D Holdings Ltd – the parent company of Costa Rica-based online sportsbook 5Dimes – and Laura Varela, the widow of 5Dimes founder William Sean ‘Tony’ Creighton, who was murdered in Costa Rica in 2018 in an apparent botched kidnapping attempt.

The settlement involves 5Dimes forfeiting $46.8m in illegal gambling proceeds derived primarily from US bettors. This sum includes roughly $3.4m in assets seized during the 2016 probe by Homeland Security Investigation into 5Dimes’ use of Amazon gift cards to help US bettors fund their online betting accounts.

Another $26m of this sum will come from 5Dimes and Varela agreeing to “help in the collection and forfeiture of additional assets.” Another $2m comes from funds seized by Costa Rican law enforcement, while the final $15m will come from 5Dimes and Varlea agreeing to “pay and consent to the forfeiture” of additional proceeds derived from the site’s escapades.

In return, the DOJ has agreed not to criminally prosecute 5Dimes or Varela for “any crimes committed prior to September 30, 2020,” with an exception made for any criminal tax violations. The DOJ also won’t pursue any civil action related to the illegal gambling activity.

The announcement comes just weeks after 5Dimes cut off its US customers while offering cryptic hints as to a “new business venture” that involved offering “an improved online sports betting experience to our many US customers.” A week later, Varela confirmed that 5Dimes was looking to take part in the US regulated sports betting market.

Following confirmation of Creighton’s death, Varela contacted the DOJ in the hope of reaching an agreement. Crucially, the DOJ’s statement noted that Varela “was never employed as a manager” at 5Dimes, “did not exercise day-to-day authority over the operations of 5Dimes” and sought to “resolve the federal investigation and change the operations of the company in a manner that complies with US law.”

5Dimes issued a statement noting that the settlement “expressly clarifies there are no legal restrictions on Ms. Varela’s use of her assets or the assets of the 5Dimes brand to explore future options,” including “re-constituting the 5Dimes brand to be licensed to conduct legal, regulated gaming activities in the US and internationally.”

5Dimes has established a new corporate identity in Delaware, 5D Americas LLC, and Varela said she was “exploring how we might relaunch 5Dimes as a legal sportsbook and casino” in the US. The Wall Street Journal quoted attorney Jeff Ifrah saying New Jersey would be the starting ground for 5Dimes’ pursuit of US licensing.

Another Varela attorneys, Stephen A. Miller of Cozen O’Connor, warned that if US state regulators “refuse to license an innocent owner like Laura, then no other offshore sportsbook will even bother to try to clean up its act and follow her lead.”

That said, speculation will abound that some other US entity looking to either enter or raise its profile in the red-hot US betting market may make a deal to acquire the well-known 5Dimes brand and capitalize on the legions of US bettors who made the Costa Rican sportsbook their home since the fabled ‘wild west’ days of online gambling.