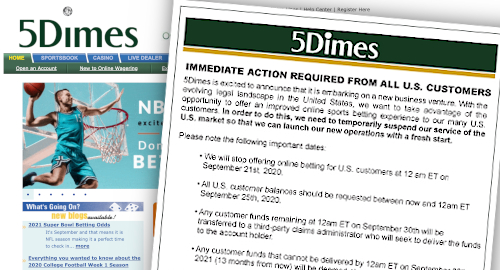 Online sportsbook 5Dimes is cutting off its US customers for as yet unexplained reasons while hinting at vague plans to resume US-facing activity at some undisclosed future date.

On Monday, 5Dimes’ US-based customers reported receiving “immediate action  required” emails from the Costa Rica-based bookmaker alerting them that the company needed to “temporarily suspend our service of the U.S. market so that we can launch our operations with a fresh start.”

The company said it was “embarking on a new business venture” due to the “evolving legal landscape” in the US. 5Dimes says it wants to “take advantage of the opportunity to offer an improved online sports betting experience to our many U.S. customers” but this will allegedly require the aforementioned suspension of activity.

The 5Dimes website contains additional information stating that it “will be back, better than ever and hopefully very soon” for its US customers. 5Dimes claims to be “relaunching the company into a better one for our customers, and to do it properly, we need to suspend service to U.S. customers, but it is only temporary.”

In more definitive timelines, US customers will no longer be able to wager with the site as of 12am Eastern Standard Time on September 21. Open bets that aren’t scheduled to be settled until after September 25 will be refunded.

US customers with money still on the site should submit withdrawal requests by 12am ET on September 25. Funds remaining on account after that date will be transferred to a third-party claims administrator. Funds considered undeliverable by September 30, 2021 “will be deemed abandoned by the account holder.”

The timing of the announcement is particularly curious, coming just days before the National Football League kicks off its new season. This would normally be one of the biggest depositing periods for companies like 5Dimes with significant US customer bases.

5Dimes apologized for the inconvenience, adding that “we wish we could tell you everything about our future plans, but for now, please stay tuned.” The changes apparently don’t impact the site’s non-US customers, although uncertainty over what exactly is going on could cause a minor run on the bank by players in other markets.

It’s unclear just how 5Dimes expects to be welcomed back into the US regulated sports betting market, given its lengthy history of defying demands from state regulators to stop catering to their customers. An SBR forum administrator claimed the site was “pursuing licensing in other jurisdictions” without going into further detail.

The announcement also comes nearly one year to the day after Costa Rican authorities confirmed finding the body of site founder William Sean ‘Tony’ Creighton, who was abducted in September 2018 by a group of individuals who blackmailed Creighton’s wife into providing $1m in Bitcoin as ransom. Multiple individuals were ultimately arrested in Costa Rica and Spain.