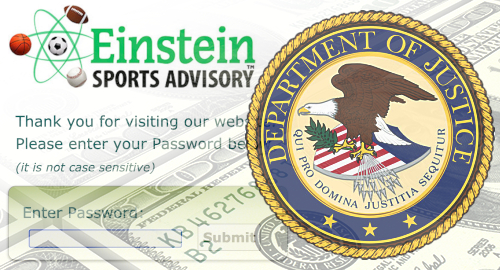 Nevada’s ill-fated experiment with so-called ‘entity betting’ has resulted in still more federal charges against another crop of con men.

On Monday, the US Attorney for the District of Nevada announced the indictment of Las Vegas residents John Frank Thomas III and Thomas Joseph Becker on a single count of conspiracy to commit wire fraud and 13 counts of wire fraud in relation to a pyramid scheme posing as a sports betting investment business.

While the duo claimed to have “special insights” into the sports world that could produce betting returns averaging 140%, the duo didn’t actually place any bets with the millions they received from their marks.

The duo allegedly convinced over 600 individuals in 40 states to deposit “at least” $29m into these funds, with the largest single whale depositing over half a million dollars. “At least” $9m of the funds placed with the scammers were ultimately lost.

Most investors who tried to withdraw the vast ‘profits’ they’d been told they were earning found their requests either slow-rolled or ignored entirely, and the DOJ said any funds that were paid out “came from money deposited by other investors.”

The scammers had previously done prison time for exactly this type of Ponzi scheme and their most recent hijinx resulted in the US Securities and Exchange Commission charging the pair with fraud in September 2019 after receiving complaints from aggrieved investors.

A jury trial is set to get underway on January 4, 2021, and the pair could face up to 20 years in prison (per count) and fines of either $250k or twice the gross sum they purloined from their clients.

Nevada approved legislation in 2015 that allowed licensing of entities that would permit out-of-state ‘investors’ to pool money into funds that would then be used to place bets with Nevada sportsbooks. The bettors wouldn’t have any more input into the wagers than they would had they invested their cash in a traditional mutual fund.

To virtually no one’s surprise, the practice never really caught on, and the whole raison d’être became somewhat moot after the US Supreme Court’s 2018 ruling that permitted other states besides Nevada to launch legal wagering. These days, entity betting is more associated with regulatory actions and legal complaints against the entities by their clients.