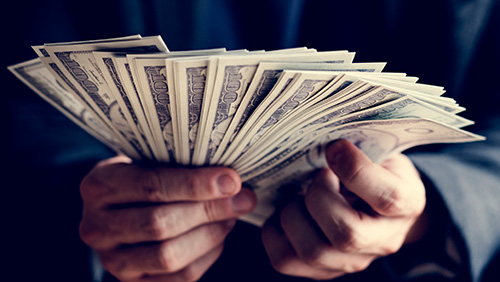 The Las Vegas Review-Journal is good at uncovering what actually goes on behind the scenes in Las Vegas.  In its latest exposé, the media outlet discovered something about the city’s sports gambling industry that most probably didn’t realize. Two individuals who served time for a million-dollar Ponzi scheme are now in charge of six sports gambling mutual funds in Vegas. I guess it’s not called Sin City for nothing.

John F. Thomas III—aka John F. Rodgers, John Frank, Jonathan West and John Marshall—manages six funds that are now being put under the microscope by the Securities and Exchange Commission (SEC). The SEC had received complaints from investors that their dividends had dried up, and the commission wants to know what has happened.

Assisting Thomas and his multiple personalities is Thomas J. Becker, according to Nevada Secretary of State records. That name precisely matches that of an accomplice of Thomas, who was locked up with him over the Ponzi scheme.

Thomas is apparently a fast and smooth talker. He bilked millions out of investors with a scam involving copy machines in the 1990s and fine-tuned his art while sitting in prison with nothing better to do. Now getting into sports gambling, there have been a number of investors (10 so far, according to the Review-Journal) who have not been able to claim their returns from the sports gambling funds. One of the funds in particular, the Wellington Sports Club fund, reports that it has generated over 600% compounded gross profit in each of 2017 and 2018, so it should definitely have some liquidity.

Thomas has told investors, “We grow money a million times faster than Warren Buffett … actually we grow it a quadrillion times faster. Just can’t move it into the banks that fast. Online sports betting solves the bank cash flow problem.” A quick couple of math calculations in the head shows that this isn’t even feasible.

The Review-Journal spoke with an attorney who represents Thomas and Becker, and who, hopefully, keeps his wallet in his front shirt pocket. He told the media outlet that there are two sides to every story and that his clients will be happy to share their “perspective.”