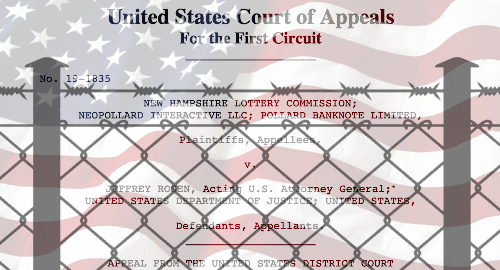 America’s online gambling market caught a break Wednesday as a federal appeals court upheld the view that the 1961 Wire Act applies only to sports betting.

On Wednesday, a two-judge panel of the US Court of Appeals for the First Circuit sided with the New Hampshire Lottery Commission against the Department of Justice by ruling that the Wire Act’s prohibition on communicating wagering information across state lines applies solely to sports betting, not to other forms of gambling.

The ruling opens the door for states that have legalized online poker to share player liquidity with other states that have enacted similar laws. To date, only Delaware, Nevada and New Jersey have entered into such arrangements, but the path now appears open to states such as Michigan and Pennsylvania to consider adding their players to the pool.

To recap how we got here, the DOJ’s Office of Legal Counsel (OLC) issued an opinion in 2011 in response to queries by state lotteries asking if they could sell tickets online if the data was temporarily routed across state lines. The OLC concluded that the Wire Act applied only to a ‘sporting event or contest,’ thus paving the way for the launch of intrastate online gambling markets in New Jersey and elsewhere.

The New Hampshire lottery promptly challenged the new OLC opinion and in June 2019 won the approval of US District Court Judge Paul Barbadoro. Trump’s DOJ, not wishing to cut off the Adelson gravy train, appealed Barbadoro’s ruling and the First Circuit panel heard the two sides’ respective arguments in June 2020.

The DOJ has the option of appealing Wednesday’s ruling to the US Supreme Court, but with Adelson having recently died and Trump now evicted from the White House, the prevailing view is that President Joe Biden’s administration of fully grown adults will call off the DOJ dogs. And then let that be the end of this turgid legal mess.