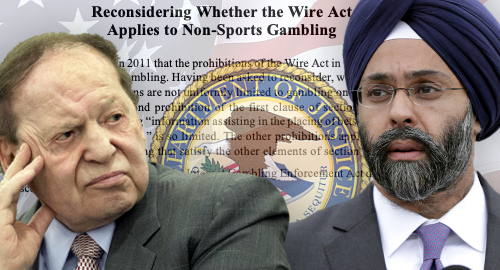 New Jersey’s Attorney General has filed suit to determine the link between casino magnate Sheldon Adelson and the US Department of Justice’s new opinion on the scope of the Wire Act.

On Tuesday, NJ AG Gurbir Grewal filed suit accusing the DOJ of illegally refusing the state’s Freedom of Information Act (FOIA) requests, which were submitted in February. Grewal (pictured right) seeks to clarify Adelson’s role in the DOJ’s issuance of a new opinion that dramatically expanded the scope of the 1961 Wire Act, which prohibits the transmission of illegal sports betting information across state lines.

Adelson (pictured left), the boss of casino operator Las Vegas Sands, is a fierce opponent of all things online gambling, which Grewal’s lawsuit notes has become “an important part of New Jersey’s economy” since the 2013 launch of the state’s online market. Grewal says New Jersey residents deserve to know “whether this federal crackdown is the result of a lobbying campaign by a single individual seeking to protect his personal business interests.”

The documents Grewal is seeking relate to any discussions the DOJ may have had with Lincoln, who heads up the Lincoln Policy Group. Disclosure firms indicate that Sands paid the group $30k to lobby Congress in the first quarter of 2019. Grewal also wants to know whether another lobbying group, Steptoe & Johnson LLP, which received $80k from Sands, had discussions with DOJ officials.

In January, the DOJ published a November 2, 2018 opinion that concluded the Wire Act applied to all forms of online gambling except racing wagers covered under the 1978 Interstate Horseracing Act. This opinion effectively reversed a 2011 DOJ opinion that confirmed the Wire Act applied only to sports betting, which led to the launch of online lottery, casino and/or poker activity in several states, including New Jersey.

Legal analysts immediately questioned the logic behind the 2018 opinion, and the Wall Street Journal subsequently reported that an Adelson-connected lobbyist had provided the DOJ with an unsolicited memo on the Wire Act in April 2017 that mirrored the arguments made in the 2018 opinion.

The New Hampshire Lottery Commission has challenged the DOJ’s opinion in federal court, based on the lottery’s view that its interstate Powerball and MegaMillions operations fall afoul of the DOJ’s new Wire Act opinion. The DOJ’s arguments to date in support of the new opinion have been, frankly, laughable, exposing the lack of sober legal thought that went into its issuing.

The DOJ has delayed enforcement of its new Wire Act opinion until June 14 in order to allow state-licensed online operators to bring their operations into compliance.