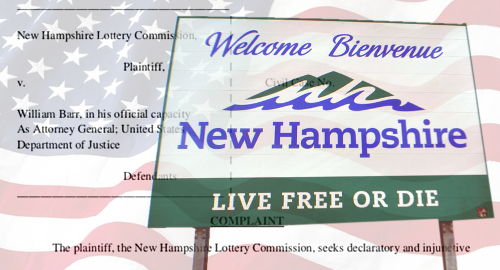 New Hampshire’s state lottery has filed a legal challenge of the US Department of Justice’s new opinion that the Wire Act’s scope isn’t limited to sports betting.

The complaint challenges the DOJ’s recently issued opinion that the 1961 Wire Act applies to all forms of interstate gambling, which potentially jeopardizes all current and future intrastate online gambling and lottery operations.

The NHLC argues that the DOJ’s new opinion ignores “clear, binding precedents” on the scope of the Wire Act, not to mention the DOJ’s 2011 opinion that set the stage for the launch of intrastate online lottery, casino and poker products in a handful of states.

The DOJ’s new opinion caused major confusion regarding how strictly the feds plan to police the temporary interstate re-routing of digital data via online gambling and lottery activity, particularly in the area of payment processing.

The NHLC’s complaint notes that “given the nature of the internet,” the state lottery “cannot guarantee that intermediate routing of data or information ancillary to the transaction does not cross state lines.” The NHLC voiced similar concerns regarding advertising its services on platforms that span multiple jurisdictions.

As a result, the NHLC claims that the DOJ’s current opinion “exposes the New Hampshire lottery system to substantial uncertainty as to the continued legality of its operations, which fund New Hampshire’s public education system.” The NHLC claims it could face an immediate loss of $90m from the suspension of sales, while future sales might total only 25% of their current level.

The DOJ’s new opinion had no shortage of potential legal challengers, but New Hampshire was considered a prime candidate. The state operates an online lottery and there is legal precedent in the US Court of Appeals, First Circuit (CA1) – under which the state falls – that the Wire Act’s scope is limited to sports betting.

Specifically, that CA1 case – which involved internationally-based betting operator Sports Offshore – found that the Wire Act “applies only to ‘wagers on any sporting event or contest,’ that is, sports betting.”

The NHLC is seeking a declaratory judgment that the DOJ’s new opinion doesn’t extend to state lotteries. The NHLC also wants the court to vacate the DOJ’s opinion and permanently enjoin the DOJ and its minions from enforcing this new legal interpretation, which the NHLC calls “arbitrary, capricious, an abuse of discretion and not in accordance with law.”

NeoPollard Interactive (NPI), which provides New Hampshire’s iLottery platform, filed its own suit against the DOJ. NPI is being represented by Gibson Dunn, whose partners include Ted Olson, one of the legal heroes of New Jersey’s lengthy but ultimately successful quest to overturn the federal sports betting prohibition.

CLUE: IT WAS ADELSON IN THE WHITE HOUSE WITH THE WALLET
In January, the Wall Street Journal reported that the DOJ’s new opinion mirrored unsolicited legal advice provided to the DOJ in April 2017. This advice was supplied by lobbyists connected to Sheldon Adelson, the Las Vegas Sands casino boss who has expended significant effort in recent years trying to ‘restore’ the Wire Act to its pre-2011 glories.

Last week, The Intercept reported that Adelson – a major Republican party donor – had dined at the White House shortly after Donald Trump was elected president. At that dinner, Adelson laid out his two main priorities: relocating the US Embassy in Israel to Jerusalem and killing online gambling.

The Intercept also reported that the timing of the release of the DOJ’s new opinion – during the recent government shutdown, when all non-essential government activity was supposedly on hold – was prompted due to incoming AG Barr’s stated disinterest in revisiting the DOJ’s 2011 Wire Act opinion. In other words, it was now or never to realize Sheldon’s anti-online gambling goal.

Last week, then-Acting Attorney General Matt Whitaker was quizzed on the DOJ’s new Wire Act view by Rep. Jamie Raskin (D-MD). Whittaker said he had no input into the new DOJ opinion and had never met with Adelson. Whittaker also somewhat testily rejected Raskin’s “inferences on how that process was corrupted or corrupt.”

On Friday, Whitaker was appointed a senior counselor in the associate attorney general’s office, where he’ll help oversee the DOJ’s civil litigation efforts.