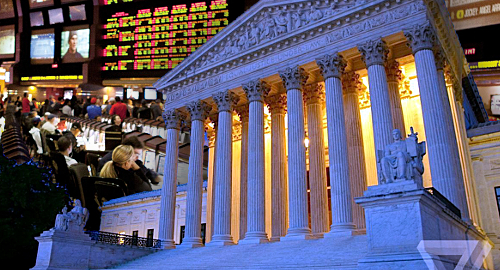 Hopes for legal sports betting in the United States got a boost on Monday as New Jersey argued its case before the US Supreme Court.

Legal sports betting supporters are feeling good about the reactions of a majority of the Supreme Court justices after hearing arguments for and against overturning the federal Professional and Amateur Sports Protection Act (PASPA), which limits single-game sports betting to the state of Nevada.

In case you’ve been re-enacting the movie Castaway for the past few years, Monday’s hearing considered New Jersey’s multi-year quest to overturn PASPA and permit sports betting at Atlantic City casinos and state racetracks. The state lost numerous lower-court rulings before the Supremes agreed in October to hear their appeal.

Opposing New Jersey are the US Department of Justice, the White House, the four major pro sports leagues and the NCAA. However, some of these leagues – most notably, the National Basketball Association and Major League Baseball – have since softened their original anti-betting stance, but still oppose New Jersey’s appeal due to their desire to see Congress impose a nationwide betting regulatory environment.

The main issue the Supremes had to wrestle with was whether PASPA violates the Tenth Amendment to the US Constitution, which prohibits the federal government from unfairly binding the hands of states in overseeing activity within their borders, in this case, specifically preventing New Jersey from repealing state-level laws against sports betting.

According to the hearing’s official transcript, New Jersey’s legal advocate Ted Olson appeared to score points with at least five of the nine justices on the commandeering issue.

However, Justices Elena Kagan and Sonia Sotomayor were among those taking the opposite position, suggesting PASPA fell under the federal government’s right under the Constitution’s Supremacy Clause to pre-empt states from taking actions that ran contrary to federal law.

The day’s most dramatic moment came when Deputy Solicitor General John Wall argued that PASPA didn’t prevent New Jersey from a total repeal of all sports betting laws, aka the ‘nuclear option’ that would effectively turn the state into a betting free-fire zone.

Chief Justice John Roberts challenged Wall’s statement that the pro-PASPA forces “don’t have a problem” with this total repeal. Roberts went as far as to suggest that Wall was “not serious” about supporting a plan that could allow 12-year-olds to walk into a casino to place a wager, to which Wall replied he was “very serious.”

However positive the hearing may have gone for New Jersey, the true fate of its sports betting appeal won’t be known until the Supremes issue their verdict, which might not come until June. This offers Congress a window of time to head off a potential New Jersey victory by proactively taking steps to impose a federal betting regulatory regime.

Rep. Dina Titus (R-NV) proposed as much in a letter she issued Monday to the ranking members of the House Committee on Energy and Commerce, urging Congress to hold a hearing on legalizing sports betting while there was still time.

True to form, Rep. Frank Pallone Jr. (D-NJ), immediately announced plans to introduce a new version of the Gaming Accountability and Modernization Enhancement (GAME) Act he introduced earlier this year that would repeal PASPA and decriminalize betting activity in states that elect to authorize such behavior.

All well and good, but with 2018 being an election year, Congress will likely show little interest in advocating for such a serious dramatic expansion of legal gambling.