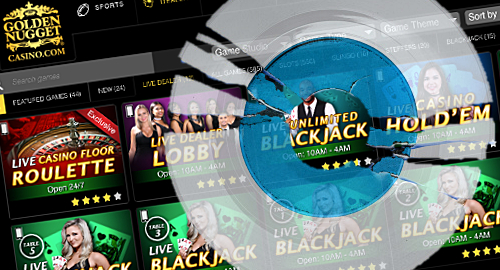 New Jersey’s regulated online gambling market roared its way back into the record books in March, which was anything but the cruelest month as online casino revenue shot up nearly three-fifths year-on-year.

Figures released Friday by the New Jersey Division of Gaming Enforcement (DGE) show the state’s licensed online gambling operators generated revenue of over $39.1m in March, a 53% rise over the same month last year and an impressive $5.5m higher than the market’s previous monthly best set this January.

The state’s online poker market had what could be described as a solid month, by which we mean revenue declined only 3.2% year-on-year to $1.9m. Meanwhile, the online casino vertical soared 57.7% to over $37.2m. January’s casino year-on-year percentage gain was slightly higher (58.5%) but March’s dollar figure was $6.1m larger.

As usual, sites affiliated with Atlantic City’s Golden Nugget casino led the online casino charge with a thoroughly impressive $14.2m of revenue in March, nearly two-thirds higher than the same month last year and $2m higher than the Nugget’s own previous market best. If that’s not impressive enough, consider that $14.2m was the sum generated by the entire New Jersey online casino market as recently as September 2016.

The Nugget’s dominance overshadowed what were significant gains by its rivals, including a record showing by Resorts Digital Gaming, which reported revenue of nearly $8.5m, of which $614k came via poker. The figure is twice the sum Resorts generated in March 2018, with much of the gain likely coming via sports bettors being cross-sold to DraftKings’ new online casino, which piggybacks on Resorts’ online permit.

The Borgata family of sites reported a solid $5.44m showing in March, up from $4.6m last year, with $483k coming via poker. Caesars Interactive Entertainment wasn’t far back with $5.13m, including a market-leading $806k from poker.

As for the rest of the casino-only sites, the Tropicana led the way with $3.7m, while Hard Rock Atlantic City reported $1.63m and the Ocean Resort Casino (now the Ocean Casino Resort) came in just under $500k.