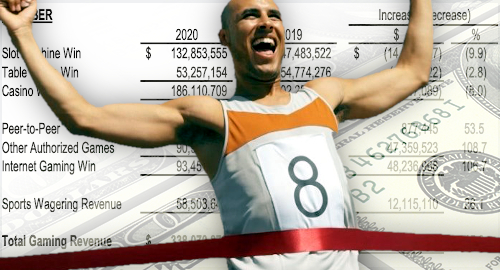 New Jersey’s online gambling and sports betting market obliterated all previous financial records in the month of October, and it wasn’t even close.

As one might expect, individual property records also fell like dominoes, led by the Golden Nugget’s $28.1m in online casino revenue. The fight for second place was won by the Borgata and its BetMGM partner, which collected $22.1m (of which $724k came via poker), narrowly ahead of Resorts Digital Gaming and its DraftKings/FoxBet partners’ $21.6m ($842k from PokerStars’ poker offering).

Things dropped off dramatically from there, with Caesars Interactive Entertainment winning the poker race with $952k, but its $8.2m overall score was only around $1m more than the Tropicana’s casino-only offering. Hard Rock Atlantic City had a respectable month with nearly $5.5m while Ocean Casino Resort ranked last with just $678k.

As ever, the FanDuel/Meadowlands combo took top honors with betting revenue of $29.8m, more than twice the $14.6m generated by runner-up DraftKings/Resorts Digital. Borgata/BetMGM was a distant third with $4.25m, while William Hill/Monmouth Park ($4.1m) and Ocean Casino Resort ($3.3m) rounded out the top-five.

New Jersey’s betting market could get a further boost if the state eases restrictions on college sports wagers. Current rules prohibit local bookmakers from taking action on games involving state schools but this week saw a New Jersey senate committee approve a measure that would permit such scandalous activity.

That said, the resolution okayed by the senate Budget and Appropriations Committee will require majority approval (twice) in both legislative chambers as well as voters giving their nod via a ballot referendum, so college betting fans shouldn’t throw away that back-of-the-bar bookie’s phone number just yet.

The Budget and Appropriations Committee is also advancing a plan to authorize wider use of fixed-odds racing bets, which has to date only been offered on a limited basis at state racetracks under the state’s sports betting rules. The plan would establish separate fixed-odds betting rules under the watchful eye of the New Jersey Sports and Exposition Authority.